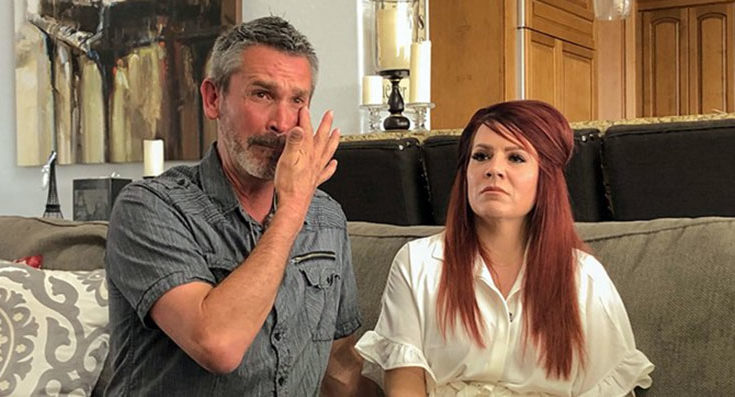 Photo By CiCi McAllister/Cronkite News: “No parent should have to bury their child,” said Jason Kouts (left). Kouts, and his wife, Maria, spoke emotionally about the loss of their son Josiah. Jason, who is the mayor of Safford, blames himself for his son’s battle with addiction and for not being there for his son in the way he felt he should have been.

SAFFORD – When Mayor Jason Kouts came home from work Jan. 23, 2018, his life was forever changed. But that change has awakened the entire town to the reality of addiction.

Kouts’ wife of nearly three decades, Maria, was in the kitchen that afternoon. Their son, Josiah, 25, had missed work and been upstairs in his bedroom all day.

Josiah had struggled with heroin addiction in the years leading up to his death, but it was only a $5 bump of heroin that ended his life. This one, , was laced with fentanyl, a synthetic opioid as much as 50 times more powerful than heroin.

Josiah was Jason and Maria’s oldest son. He grew up playing sports and making straight As, and he always had friends around him.

“He seemed to live, like, the perfect life. Everyone loved him. He just didn’t have a whole lot of struggles,” his mother said.

After high school, Josiah went to Mesa Community College on academic scholarships. He planned on being a walk-on for the soccer team, but after only a short time at school, everything changed.

“He was there about six months,” Maria recalled, “and we got a call from a friend and they said, ‘Josiah’s 90 pounds, he’s not going to college, and he’s just stuck in his apartment,’ and we’re like, ‘What?’”

They were devastated. Jason left work early that day and they drove to Mesa right away, where Josiah was hiding in his apartment, afraid to open the door. Every piece of furniture he owned – his bed, the nightstand, the couch – had been sold. He was lying on the floor.

Jason and Maria moved him back to Safford that day, kicking off a series of detoxes, treatments and near-death experiences. Over the next few years, he lived at home and occasionally was homeless. He was required to sleep on his parents’ bedroom floor so they could monitor him closely.

It took years of trials and tribulations before Josiah finally got clean, after a three-month stay at Phoenix Rescue Mission. The reward was moving across the world to France, following the love of his life. His parents paid for the plane ticket.

Josiah spent a year in Paris learning the city and the language. At the one-year mark, he got a job as a tour guide.

“This is Josiah. He was so driven,” said Maria, who’s associate pastor at the River, a nondenominational church in Safford.

But soon, his cravings returned and he started medication-assisted treatment, considered the gold standard for treating opioid use disorder.

For Josiah, it wasn’t helpful. His parents said it was more addicting and made it harder for him to stop using. Slowly, his marriage deteriorated and he returned to Safford. He started working for his father’s construction company, saving his money for a cross-country road trip with friends he had met overseas. They traveled to New York, Chicago, Los Angeles, Las Vegas, the Grand Canyon for nearly a month.

“Josiah came back to Safford, spent the night, the next day, he slept all day,” Maria said.

But that night, the family gathered on the couch for family time. Josiah told them all about his trip – even some details Maria would have preferred not to hear.

The next day, Josiah didn’t show up for work. When Jason came home about 4 p.m., Maria said hadn’t seen Josiah all day. She asked Jason to go upstairs and check on him. He eventually mustered up the courage to climb the stairs. Josiah’s bedroom door was locked, so Jason pried his way in.

“This is forever burned and etched into my mind and my memory,” Jason said, “and there he was, off the side of the bed, face like this, kind of crunched over, and I run, I just started screaming. I touch him … there’s no pulse and the body is as cold as ice.”

Josiah’s life-ending dose came from a high school acquaintance. The man warned Josiah over a message about the strength of the heroin bump, using emojis.

“The young man had told Josiah only do 75 percent of it because it’s fire,” Maria said. “And he put little fires … fire, fire, like five little fires across there.”

After Josiah’s death, Jason and Maria put their pain to work, refusing to let it dictate their destiny. They started sharing their story with the community, hoping to help solve the opioid epidemic.

Safford is home to fewer than 10,000 people. After Josiah’s death, Jason and Maria started a nonprofit. They plan to open Josiah House, which would be the first 24-hour faith-based drug rehab center in Safford.

The community came together to support Jason and Maria after Josiah’s death. Now, they talk to people at church about what happened.

Linda Brown goes to church at the River and learned about Josiah’s addiction soon after meeting them. She knew Josiah personally and rallied around Jason and Maria when he died.

“Before Jason and Maria, I was overwhelmed and I felt so helpless,” Brown said. ”I have a lot of family members who are lost in addiction, and I had to idea how to help them until Jason and Maria came alongside me and I could ask them questions.”

But for Jason and Maria, the pain doesn’t go away. They don’t think it ever will. In fact, Jason still copes with internal guilt every day.

“I was just chasing after saving the community, saving the world if you may, and yet I failed on my own homefront,” Jason said. “I would say I’m sorry. I was so mean to him, I was so … I was the boss, I was the dad, there was times we’d … butted heads at work and I would yell and I would scream and I would cuss at him.”

That tough love has turned softer since Josiah’s death. The pain and guilt now motivate Jason and Maria to carry their late son’s legacy.

“I see a book,” Maria said. “It’s a large book. And 37 pages of the book were written up by Josiah himself. But his book is not going to stop turning as long as I’m on this earth. It’s going to still be written out. It wasn’t for nothing that my son was born. It wasn’t for nothing that what my son went through and what we’ve gone through in our lives. I will finish his book if it’s the last thing I do. With the very last breath within my body, I will finish that book for my son.”

Read more of Josiah’s story in his parents’ own words in the Gila Herald’s five-part series first published in February 2018.