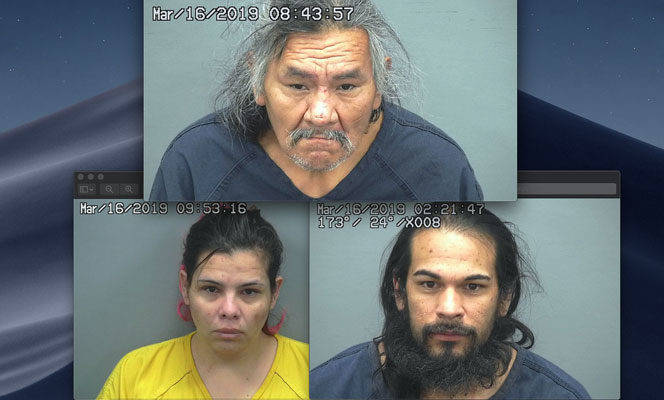 Contributed Photo/Courtesy GCSO: Top, Willie Yazzie; bottom, from left, Eunice Yazzie, and Martin Delgado were all booked into the jail on drug charges.

GRAHAM COUNTY – A tip to the Safford Police led to the apprehension of multiple alleged drug dealers and the removal of 12 grams of heroin and 23 grams of methamphetamine literally from the street.

On Friday, March 15, a Safford officer received a tip that a shipment of hard drugs would be coming into Pima and transferred into a gray, Ford two-door coupe, which would then travel to an area on Safford/Bryce Road. The Safford officer passed the tip onto Graham County Sheriff’s Office deputies and authorities staked out the highway for the vehicle.

At about 10:20 p.m. authorities observed the car leave the Giant gas station in Pima. A deputy stationed at Alder Lane and U.S. Highway 70 then followed the vehicle as it turned onto Norton Road.

The suspect vehicle then turned onto Reay Lane and began to speed, according to a Sheriff’s Office report. The deputy also said he observed the vehicle cross the center line. The deputy then performed a traffic stop on the vehicle and came upon its driver, who gave a fictitious name.

The Safford officer also arrived at the scene and identified the driver as Willie Harold Yazzie, 58, who had a felony warrant for his arrest dating back to a 2010 case regarding possession of a narcotic drug and drug paraphernalia that was never resolved.

While taking Willie into custody, authorities located a small amount of heroin and a straw with burned ends in his shirt pocket. A further search located a “golf ball-sized” package in Willie’s jacket, which ended up being roughly 12 grams of heroin.

One of Willie’s passengers, Eunice Annette Yazzie, 32, had two outstanding shoplifting charges against her and was found to be concealing 23 grams of methamphetamine. Eunice claimed that another passenger, Martin Delgado, 32, had thrown the meth at her to hide. Eunice was also already on probation for a previous marijuana charge out of Bowie.

Delgado, who Eunice described as her child’s father, was found in possession of a small quantity of heroin and meth, as well as a glass pipe.

The fourth passenger, Javier Delgado, was found with a plastic baggie with apparent drug residue. Delgado allegedly said he found the baggie on the ground at the Giant gas station and picked it up so a child wouldn’t. He was told he would have a charge of possession of drug paraphernalia long formed against him and was released at the scene.

Willie had complained of a hurt back and was transported to Mt. Graham Regional Medical Center for evaluation. After being medically cleared by the hospital, he was booked into the Graham County Adult Detention Facility on charges of possession of a narcotic drug for sale, possession of drug paraphernalia, false reporting to law enforcement, and his warrant.

Eunice was booked into the jail on a charge of possession of a dangerous drug for sale after Delgado refused to say the meth was his even after the two were allowed to talk about it at the jail.