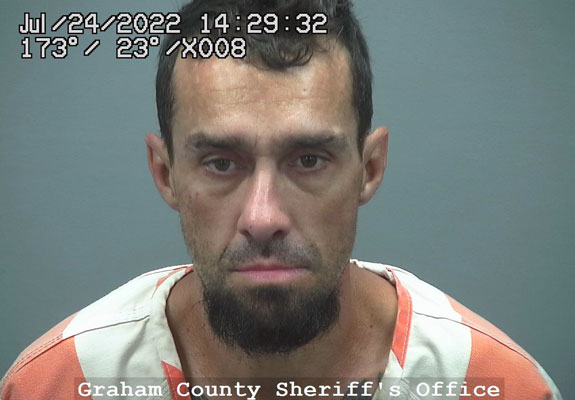 GRAHAM COUNTY – A man who had been on wanted status for half a year was apprehended and incarcerated late Saturday night/early Sunday morning after an alleged domestic shooting.

Goucher was already on probation for an aggravated DUI charge when he was arrested for aggravated DUI again in 2021. He failed to show up for court and a warrant for his arrest was issued.

Goucher had an additional warrant for another incident that occurred at the end of 2021 regarding a weapons violation charge. For that incident, he was charged with two counts of endangerment, two counts of disorderly conduct with a deadly weapon, and a count of threatening or intimidating. He declined to show up for court on that case as well and was issued a warrant with a bond set at $5,000.

According to County Dispatch notes, deputies were dispatched at about 8:30 p.m. on Saturday to a residence on S. Critter Lane, which is south of Safford and branches off E. Swift Trail. According to the reporting party, he responded to the victim’s address, retrieved the victim after she had allegedly been fired upon by Tyler, and took her to his residence, where he then called authorities. The reporting party said the victim had wounds to her leg, shoulder, and arm, and was actively bleeding. He advised he was also armed but was concerned because Tyler knew where he lived.

While first responders were sent to treat the victim, Tyler was taken into custody and booked into jail. The Graham County Sheriff’s Office is expected to issue a press release sometime on Monday. The Gila Herald will update this article afterward.