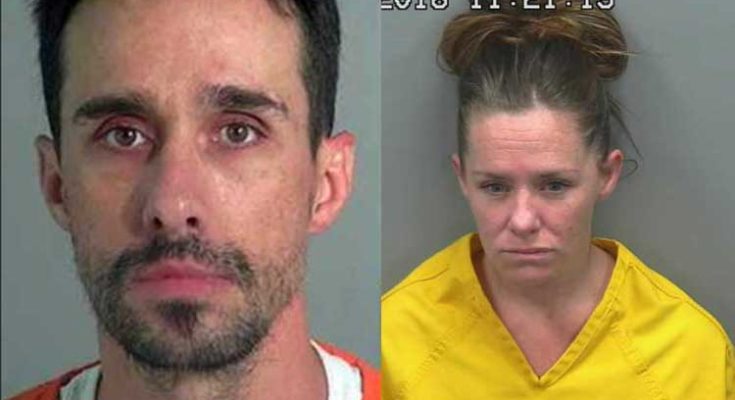 Contributed Photo/GCSO: Tyler Goucher, left, was arrested for aggravated DUI and his girlfriend, Tracey Lynn Leachet-Lackner, was booked into the jail for possession of drug paraphernalia after the pair were involved in an argument and reckless driving.

SAFFORD – The couple that drives recklessly together while under the influence of drugs and alcohol stays together?

Tyler James Goucher, 35, was arrested for aggravated DUI, and Tracey Lynn Leachet-Lackner, 34, was arrested and booked for possession of drug paraphernalia after it was reported that they got into a two-vehicle collision together in the morning of Friday, March 30.

Officers were dispatched to 12th Avenue and Chaparral Drive at about 8:05 a.m. regarding the collision. Upon arrival, officers learned Goucher was operating an ATV while his girlfriend, Leachet-Lackner, was in a four-door sedan. Reportedly, they were arguing and when Leachet-Lackner attempted to drive away Goucher cut her off in the ATV and rolled the vehicle without ever hitting the sedan, according to Leachet-Lackner. Another witness at the scene said Goucher was ejected roughly 15 feet.

The witness said he heard Goucher shouting at Leachet-Lackner about her having heroin in the car and was mad at the witness for calling the police to report the collision.

An officer noted Goucher’s speech was slurred and he had red, watery eyes. Paramedics from Lifeline Ambulance arrived, and while Goucher walking with a limp, he refused medical treatment.

Goucher, who has a previous conviction for possession of a dangerous (methamphetamine) drug showed signs of methamphetamine intoxication as well, according to the officer’s report, but he denied using meth and instead said he had smoked some marijuana just prior to meeting up with Leachet-Lackner. He said he was just trying to stop Leachet-Lackner when he tipped over his ATV. The pair were allowed to hug each other and make up before both were arrested.

Goucher, who was also found to be driving on a suspended license, failed a field sobriety test and later willingly gave a sample of his blood for testing purposes. He was then released from the Safford Police Department and was given a ride to his mother’s house. A charge of aggravated DUI was sent to the Graham County Attorney’s Office for review.

While one officer was dealing with Goucher at the scene, another one dealt with Leachet-Lackner, who advised that she smokes heroin after she runs out of her prescription pain medication. A search of Leachet-Lackner’s purse and vehicle yielded multiple burnt straws, a pen tube apparently used to smoke heroin and a metal pipe with marijuana residue, which she said belonged to Goucher.

Leachet-Lackner was then arrested and booked into the Graham County Adult Detention Facility for possession of drug paraphernalia.