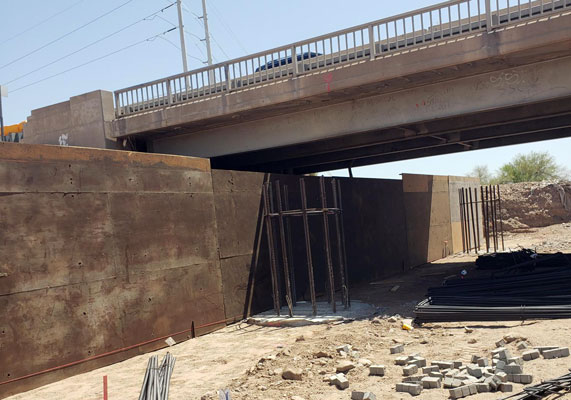 Photo Courtesy ADOT: Look for Gila River bridge replacement projects like this one that involves State Route 79 east of Florence.

PHOENIX – Since ADOT outlined ambitious plans earlier this year to widen I-10 between Phoenix and Casa Grande, we’ve been talking about new, wider bridges that will carry the Interstate over the Gila River.

The construction will generate even more news coverage, but there’s already another bridge replacement project underway on the Gila River. We figure it’s time to put the spotlight on that lesser-known bridge that’s taking shape east of I-10 in Florence.

The project began in February when State Route 79 crosses the normally dry riverbed. Crews are now working to construct bridge girders for the new structure and are already 36 percent complete with the $22.1 million project.

The work requires overnight restrictions and delays at times, and that will be the case for two weeks, beginning Monday, July 18.

One benefit to drivers is that ADOT developed the replacement project with an innovative plan that keeps both lanes of traffic open on SR 79 during peak hours aside from a few days of lane restrictions toward the end of the project. That’s because crews are constructing the bridge in two halves – one on each side of the existing structure – and will slide the pieces together later on.

If you look at the project photos, you’ll see some new piers are already in place under the existing bridge while also extending out on either side. That extra width is where each new bridge half will be constructed.

Eventually, crews will dismantle the existing structure and then slide the segments into their permanent home. That will require two weekends in which the bridge is restricted to a single lane, and a temporary traffic signal will allow only one direction of traffic to flow at a time.

The project in Florence is expected to be complete in 2023, which is when ADOT anticipates work will begin to widen the Gila River bridges on I-10. So if you’re a regular traveler on either highway, be prepared to see some big improvements unfolding in the next few years.