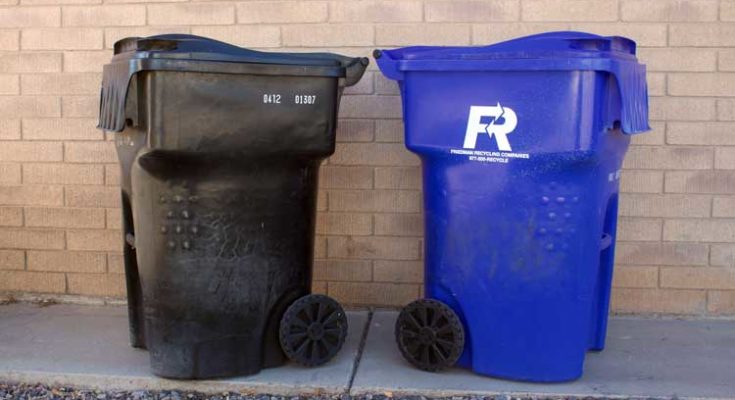 Jon Johnson File Photo/Gila Herald: It looks like the blue bins are going to stay around for a while as Safford has recommitted to its recycling program.

SAFFORD – While the issue regarding China no longer taking recycling products hasn’t changed, Safford City Manager Horatio Skeete crunched the overall numbers and has deemed the city’s recycling program still pays for itself through customer fees and will continue unabated.

The city began its recycling program Sept. 24, 2015, and has a five-year contract with Friedman Recycling to rent its blue recycling bins and have the company transport the recyclable materials to Phoenix. There are roughly two more years left on the contract.

In that article, the cost of the rental of 3,300 containers and the price to have Friedman haul away the collected recyclables was listed at about 11,000 per month and that with the city now only getting $1 per ton of material, it was down roughly an additional $580 per month from previous revenues.

Skeete was quoted as saying, “It will continue to be a challenge to send it to Phoenix at that price. If the market returns to $15 to $20 per ton, then there’s absolutely no reason to not do it because then the cost is minimal. If it stays at $1 (per ton), then it will continue to be a strictly emotional decision rather than a financial decision.”

The price plummet from $30 per ton to $1 per ton due to the shutdown of the Chinese market really only cost the city about $580 per month, and Skeete said while the Chinese situation is not likely to change, recyclers in the United States could be up and running enough to take up the slack in about six months. Recently, Phoenix Assistant Public Works Director Joe Giudice said he has been collecting bids from contractors to make Phoenix the first U.S. city to build a mill to remanufacture plastic containers that currently don’t have a strong market like the one for plastic water bottles.

At the Safford City Council meeting Monday night, at the behest of the council, Skeete examined the entire sanitation department’s costs and revenues and deemed that since only 12 percent of what the department picks up is recyclable materials, he equated the total cost to the city to run the recycling program was $228,000 annually, while regular trash pickup and disposal at the landfill cost $679,477. That assessment included not only the rental of the containers and the cost to haul away the recyclables but also the cost for a regular once-a-week pickup from the sanitation department and compacter. The cost was based on expenses required to run the entire sanitation department during 2017.

“So, the difference between the consolidated amount collected and the consolidated costs of recycling and sanitation services was $272,000 (actually $271,523),” Skeete said. “So, collectively, the program is still paying for itself.”

“So, my recommendation is that based on these numbers using last year’s actuals, that we continue to provide the recycling services as is to the community.”

Additionally, the recycling program diverts about 50 tons of material from the landfill annually, which saves an additional $25,000, according to Skeete, and extends the life of the landfill.

Skeete also previously told the Gila Herald that the city is looking at perhaps starting a green waste option to minimize the amount of material going into the landfill. The green waste program would start with having a separate area at the landfill for users to bring their material, and will not start with green collection containers like the current blue recycling containers. Skeete said he would present options to the Safford City Council to grant licenses to businesses to operate the green waste program instead of the city operating it. Read a previous article about the green waste option here.