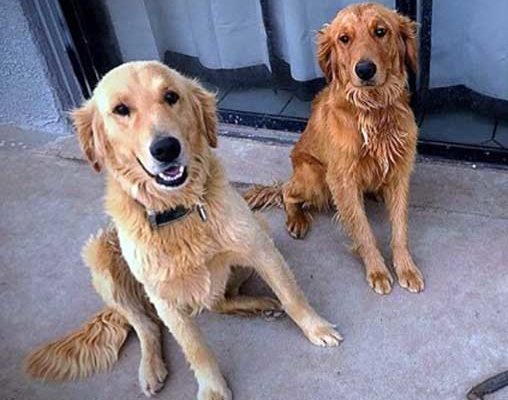 Contributed Photo/Courtesy Brandi Morris: Bandit, left, and Bear were two of the three dogs who perished in the bee attack.

One dog managed to escape the area and survived

ARTESIA – A family is reeling from the tragic loss of three of their dogs in an Africanized bee attack that took place on E. Antelope Lane on Saturday. A fourth dog managed to flee the attack and survived.

The Safford Fire Department was dispatched to the residence roughly 10 miles south of Safford at about 9:24 a.m., along with a deputy from the Graham County Sheriff’s Office.

Upon arrival, the reporting party advised his wife, Brandi Morris, had retrieved the dogs and took them to a veterinarian for treatment. He said she was also stung multiple times.

According to Morris, she had let her dogs out into the backyard that morning and went to run some errands. She returned at about 9 a.m. and, while still in her car, heard yelping from the backyard and then saw three of her dogs reacting to being attacked by bees.

“I also noticed all these black flying insects flying all over my backyard and all over each of my dogs,” Morris told the Gila Herald. “I opened my door and heard the humming and buzzing. I will never forget that sound.”

After not being able to locate her fourth dog, “Molly”, Morris managed to gather her three dogs and bring them into her garage. The bees followed, however, and Morris then brought the dogs into her laundry room and used bug spray to ward off the bees, who continued in pursuit.

Morris said she called 911 about the bees, but a dispatcher informed her that if they weren’t actively stinging they couldn’t send help. A neighbor arrived shortly thereafter and helped Morris transport her three dogs to the vet. While doing so, her thoughts turned to Molly, who she hadn’t been able to locate. Both Morris and her neighbor were stung multiple times extricating the dogs into a truck to take them to the vet.

“I was frightened and scared,” Morris said. “I was angry because my husband had previously called about these bees and we were told the same thing over and over again – that nothing could be done if they aren’t actively stinging a human. My heart was aching when I looked back at my dogs’ faces knowing how much pain they were having.”

Morris added that they had previously called an exterminator to take care of the bees as well but were told that the property owner had to be the one to place the call.

While en route to the vet, the neighbor spoke to his wife on the phone, who said she had also been stung and that the bees were starting to agitate their animals. The neighbor’s wife also called 911, along with Morris’ husband, and first responders were sent to battle the bees.

Safford Fire Chief Clark Bingham, who is allergic to bees, said it “took a little bit” to find the hive because it wasn’t on the property where the people and dogs were stung. Firefighters eventually located the hive in a shed on a neighboring property which currently does not have anyone living there. Bingham said while nobody lives at the residence it appeared to have been kept up by some sort of caretaker.

Bingham said the firefighters soaped the bees with the fire truck and removed a roughly 60-pound hive.

“We were able to take the hive and take the comb and throw it all away,” Bingham said.

He advised that anytime his department responds to a wild bee call he assumes they involve Africanized bees due to their prevalence in the area.

“Any bees that are not maintained by a beekeeper are considered Africanized bees,” Bingham said.

Africanized bees, or killer bees, are descendants of southern African bees imported to Brazil in 1956 to breed a honey bee better suited to the South American tropic conditions.

They are slightly smaller than European bees but have garnered their nickname by viscously attacking in far greater numbers and pursuing perceived enemies for far greater distances than European bees. Once disturbed, Africanized bees have been known to stay agitated for up to a day, attacking people and animals more than a quarter mile from their hive. They have been responsible for a number of animal and human deaths in the Gila Valley.

The video below is from a previous Africanized bee extermination performed by Rattlesnake Exterminating.

Due to the dangerous nature of the bees, Bingham recommends people be especially vigilant of their surroundings.

“Be mindful of your property and what is next to it,” Bingham said. “If you see anything like that, get an exterminator to take care of them because anything can set them off. A lawnmower, weed eater, or chainsaw or anything like that can incite an attack.”

Morris returned home from the vet and began looking for Molly. Later that day she learned that her two golden retrievers, “Bandit” and “Bear” had passed. The next day, the vet had more sad news as her third dog, a black Great Dane mix named “Shilah”, had also succumbed to the bee attack. Morris said the vet’s words crushed her.

“I lost three of my babies in less than a day in such a horrific, tragic way,” Morris said. “Never in a million years would I have thought this could have happened.”

All was not lost, however, as Molly had made her way back to the residence and was found in good shape with only a few dead bees in her coat.

Later on Sunday, Morris went and picked up her 6-year-old son, who, thankfully, had been at his grandparents’ home during the ordeal.

“I am forever thankful he was not involved in this,” Morris said.

“It is still hard for me to go into my backyard. I keep reliving those moments every time I open that back door curtain. We loved our dogs. They had a nice, big backyard with grass and they each had their own pool of water to enjoy. We took them for truck rides, swimming, (and) let them sleep inside and just loved them unconditionally. I will miss them deeply.”