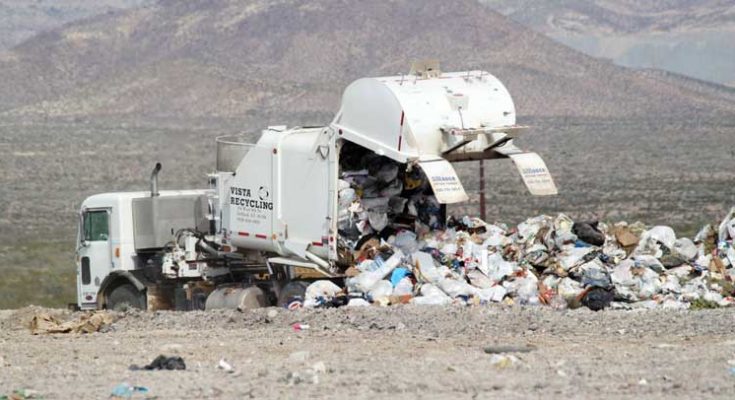 Jon Johnson File Photo/Gila Herald: Safford’s recycling program may be on its last legs, which would mean a return to dumping recyclables in the Safford Landfill.

SAFFORD – The city of Safford is still recycling, but that may soon change.

After 18 months of price reductions for its recyclables, which has seen the city go from a peak of receiving $30 per ton to now just $1 per ton, the city’s recycling program may be on life support.

“We’re not getting anything for the recycling,” said Safford City Manager Horatio Skeete.

“From a business perspective, no, it’s not doing what we intended for it to do,” Skeete said.

The reason for the price plummet is due to the closure of the Chinese market, which was the largest purchaser of recyclable materials. China changed its standard from 85 percent contamination allowed to 95 percent and now is basically at zero percent allowed.

“You can’t get zero percent contamination,” Skeete said. “It’s impossible and the whole load gets rejected. It effectively shut down the whole market.”

Recyclers have tried to make up the loss of business by selling to a couple plants in Mexico and some smaller plants nationally, but they have not been able to handle the number of recyclables available. While some municipalities have started sending some plastics to landfills due to the saturation, Skeete said Safford’s extra recyclable materials – especially plastics – are instead being stored in Phoenix with the hope that the market will rebound. Unfortunately for the city, that will have no effect on the price it already received for the material that has already been processed. Additionally, with the price of oil where it is, it is actually cheaper to produce new plastics instead of recycling old plastics, even though the latter is much better for the environment.

“Unless you are doing this for an environmental reason, it is no longer a viable business proposition at this point,” Skeete said.

Skeete added that the company is stockpiling the materials in the hopes that either the conditions and agreements in China will change or alternative options will become available.

Recently, Phoenix Assistant Public Works Director Joe Giudice said he has been collecting bids from contractors to make Phoenix the first U.S. city to build a mill to remanufacture plastic containers that currently don’t have a strong market like the one for plastic water bottles.

However, the current reality of the situation has put the skids on Thatcher’s thoughts about expanding its recycling program to curbside pickup. Town Engineer/Interim Town Manager Heath Brown previously informed the Thatcher Town Council about a plan to purchase the cans and start its own program like Safford, but after speaking with Skeete he told the council at its July meeting that the plans would be on hold until they see if the business can recover. Read an article on their previous plans here.

Safford started its program mostly to reduce the amount of material that went into its landfill. To that end, Skeete said there are plans in the works to create a 25-year extension at the landfill and have applied to the Bureau of Land Management expand the landfill to the west side for a 50-year solution.

“Hopefully, over the next two years, we will have a 50-year solution for the landfill,” Skeete said.

Additionally, Skeete said the city is looking at perhaps starting a green waste option to minimize the amount of material going into the landfill. So, if the city stops its recycling program it could make up some of the added materials headed back into the landfill by taking out the green waste. The green waste program would start with having a separate area at the landfill for users to bring their material, and will not start with green collection containers like the current blue recycling containers. Skeete said he would present to the Safford City Council options to grant licenses to businesses to operate the green waste program instead of the city operating it. Read a previous article about the green waste option here.

If Safford stops its recycling program, that could also effectively stop Thatcher’s fledgling program and people’s only option could be to take items to Vista Recycling in Safford or Metal Mite Recycling in Pima, but both of those businesses do not take all the types of material currently allowed in Safford’s program.