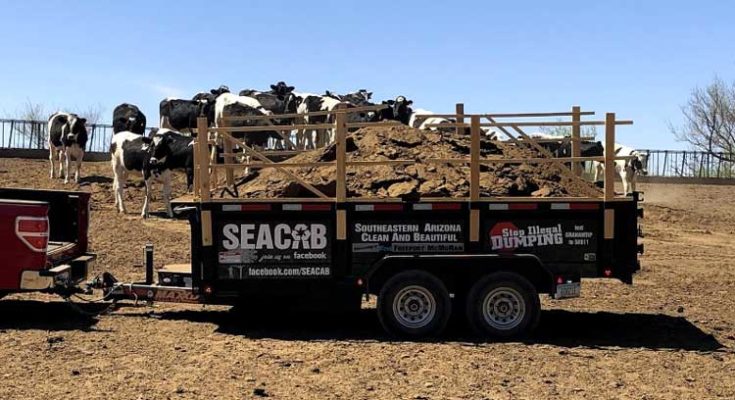 Contributed Photo/Courtesy SEACAB: A critical component in making green and brown waste into compost is manure. SEACAB received its manure for the experimental compost site from a dairy farm in Duncan.

SAFFORD – Recycling is growing in the Gila Valley, with Thatcher considering expanding its program to be akin to Safford’s program of a personal recycling bin at every residence and business and Pima examining what it can do as well. But there is one thing that those programs lack – they do not handle green waste.

Each month more than 25 tons of green and brown waste is dumped into the Safford Landfill, taking up valuable space. Southeastern Clean and Beautiful (SEACAB) hopes to curb that problem by teaming up with the city of Safford and/or other government agencies and municipalities to create a green-waste recycling program that would turn the green waste into highly sought after compost. SEACAB first brought this to Safford’s attention at an April 2017 meeting.

At its Monday meeting, the Safford City Council heard a report from Susan Elsberry of SEACAB regarding an Experimental Compost Site the organization created at Our Neighbor’s Farm & Pantry with the assistance of the AmeriCorps National Civilian Community Corps (NCCC). The NCCC is a community service program for participants between the age of 18-24, who commit to 10 months of service requiring 1,700 hours of work.

“Without these young people, we would not have had the power, the time, the energy, or, quite frankly, the muscles,” Elsberry said. “We set this up as a municipal compost experiment, but we used antique tools quite frankly and muscle power to do this.”

“SEACAB could not have done this without this NCCC team and I thank them. This was nasty, smelly, backbreaking work, but we created a baby, municipally-approved compost windrow and we continue to learn. Their efforts allowed me to ask more and better questions.”

The NCCC has been in the area since April and has performed numerous projects for a variety of local organizations, including the Gila Watershed Partnership and the Graham County Cooperative Extension out at Discovery Park Campus. NCCC Team Leader Kelsey Pearl headed up the compost project with Bree Hansen.

Without the aid of the normal heavy machinery required to turn green and brown waste into compost, SEACAB instead used brute labor from the NCCC to create a small windrow of compost at Our Neighbor’s Farm & Pantry. A windrow is a pile of organic composting material that is placed into a long row, which is then turned during the composting process.

To create the compost, the group combined 70 percent of finely chopped green and brown waste with 30 percent of manure, which was provided by a dairy farm in Duncan. The group then turned the windrow two times per week to air out and continue the composting process.

Elsberry advised that a commercial-sized compost site would be easy to create as the only ingredients necessary are green and brown matter, manure and some water. By purchasing a simple Aeromaster windrow turner that is pulled by a tractor or other heavy machinery and a water tank and screener, a compost site could be easily added by the landfill since there is already a scale and operator in place to weigh green waste being brought to the site. The only other heavy machinery required would be a grinder.

“This, for a small municipality, is the potential for a good starter unit,” Elsberry said. “This is very affordable. The thing about starting small and sensible and realizing what you have and not overbuying, is your publicity is always better; you’re optics are always better. You’re spending money sensibly and then you can go back to the well and ask for more money as you grow.”

She also spoke about a for-profit group called Tanks Northwest in the Tucson area, which people bring in green and brown waste for just slightly less than it would cost them to drop it off at the regular landfill. The Tanks site averages more than 4,000 pounds per month of material and they make, on average, 800 yards of manure, which they then sell for $34 per yard.

Elsberry suggested creating a customized grinder for the area’s specific needs and utilizing prison labor to help keep costs down.

Safford Mayor Jason Kouts expressed his desire to continue the discussion to move forward with the possibility of creating a compost operation.