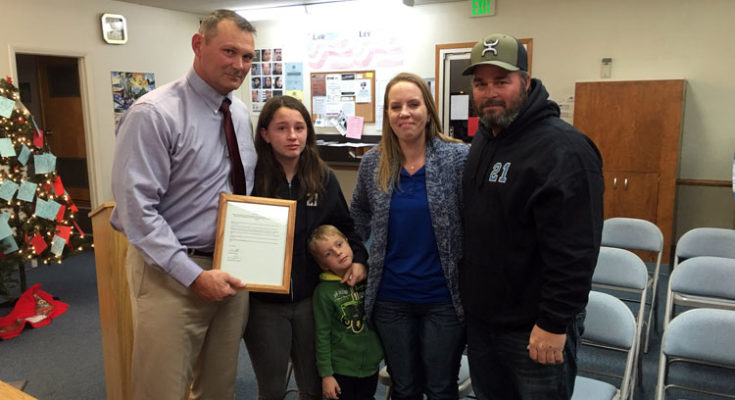 PIMA – Emotions ran deep at the Tuesday, Dec. 4 Pima Town Council meeting, as the council unanimously approved a resolution naming the northern soccer field as the Carsen Gary Brown Field, honoring the youth who tragically died in an UTV crash July 23 during a fishing excursion.

Carsen was an avid soccer player who rose through the ranks of the Pima Soccer League and even served as a referee. His mother, Christie Brown, also served as president of the league for a number of years.

Town Manager Sean Lewis previously announced the intention to name the field after Brown at the Pima Soccer League’s 20th anniversary in between all-star games in November.

During the Dec. 4 meeting, Lewis explained how he was introduced to Carsen and that the youth had come to him with an Eagle Scout project at the soccer fields to create gates to make it easier for attendees to come to the field. Before Carsen could begin his project, however, he suffered his accident.

The Eagle Scout project was later done by Carsen’s friend, Justin James, in honor of Carsen through the Spirit of the Eagle program. Justin designed and built the walkways through the fence for the soccer fields, which uses all steel pipe.

Lewis reminisced that during his interactions with the Eagle Scout project Carsen was spoken about frequently and Lewis learned more about the life of the young man and felt he was more than worthy to recognize the soccer field after him.

“It dawned on me one day when I was out at the ballfields,” Lewis said. “Because Carsen was such an avid soccer player – he was a soccer referee; he volunteered and helped his mom – I thought the only thing that would be right is to drop a resolution and name it the Carsen Gary Brown Field.”

After the council approved the resolution, Lewis presented it to Carsen’s family set in a frame.

“It’s great to live in an area where people are not just people or residents or citizens but where we’re all kind of a big family,” said Pima Mayor C.B. Fletcher.