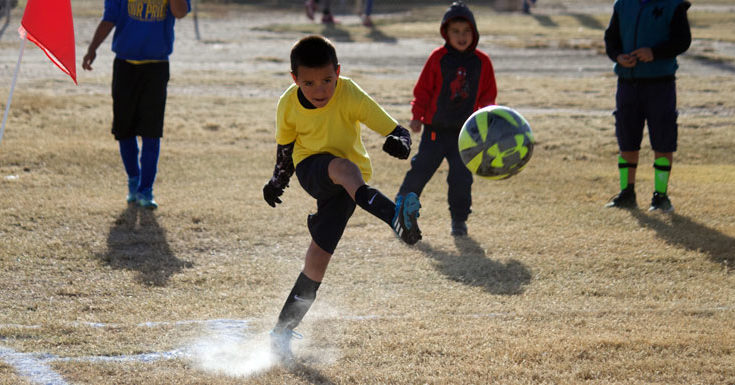 Jon Johnson Photo/Gila Herald: Miguel Hernandez tries to bend it like Beckham on a corner kick. The Pima Soccer League celebrated its 20th season Saturday in between its all-star games.

Soccer field to be memorialized as Carsen Brown Field

PIMA – After 20 years the Pima Soccer League is alive and kicking better than ever.

On Saturday, the league held its all-star games for its junior and senior leagues.

In the junior league game, Page Ashby, 9, came up with a winning goal amid traffic on a partial breakaway late in the fourth period to give the yellow team the victory, 1-0.

The senior game went to a shootout tied at 1-1, where Joe Palmer and Tashoney Kniffin made penalty kicks to give the victory to the blue team, 3-1.

Miguel Hernandez, who excelled in both the junior and senior all-star games, said soccer was one of his favorite sports and that he liked scoring goals the best.

Miguel said playing with and against his cousin, Efrain Hernandez, was both fun and beneficial to both of them.

Marcy Beus started the league and ran it for its first 14 seasons. Current league president, Amanda Rogers, honored Beus and other past presidents Saturday, along with the league’s first referee, Clint Woods, and Luke Hoopes, who welded together the first soccer goal for his Eagle Scout project. Beus said the original thought of founding the league was to save money and that there were more than enough players to have a separate Pima league.

“I got tired of traveling to AYSO and spending so much money,” Beus said. “We could do it cheaper.”

And cheaper it was. When the league first started it had volleyball nets for goals in the junior and senior leagues, while the pee wee league used cones. The soccer balls were fortuitously donated by a local phone company, which happened to be at the Pima Town Hall when the league was proposed.

From its humble beginnings, the league has grown to 200 players and is now totally self-sufficient, according to Pima Town Manager Sean Lewis.

“The money they bring in and how they manage it – what they buy – it funds itself,” Lewis said. “The town sponsors certain things, but that’s just to make things nicer and easier. The league is totally self-sufficient because they do it the right way.”

During the ceremony after the junior all-star game, Lewis announced that the big soccer field will be named Carsen Brown Field in a granite memorial once approved at the Dec. 4 Pima Town Council meeting.

Carsen, 15, was a fervent soccer player who came up through the Pima Soccer League to move on to other leagues. Carsen tragically died in a UTV crash on July 23 during a fishing excursion.

“Not too often do we have somebody in this Valley who is so into or so involved in one sport and so supportive to our community,” Lewis said. “So, I talked to Amanda and decided to do something to forever honor Carsen . . . We just want to make sure that everybody knows what Carsen meant to us – even for those of us (who) didn’t know him. That he will continue to impact us. We want people to continue to see who Carsen is, so we will have a monument there before the start of next soccer season and everybody will forever now know that that’s Carsen Brown Field.