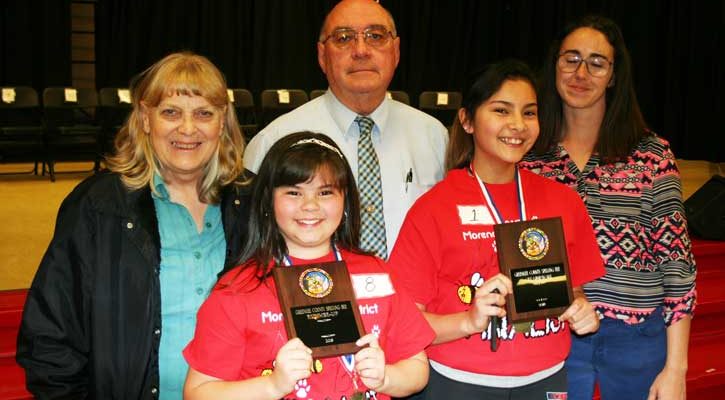 “Adios.” It is a Spanish word meaning “goodbye.” Adios is a well-known word even by non-Spanish speakers.

It was the also word that meant the end of the event and the 2017-18 Greenlee County Spelling Bee championship for Morenci’s Cambri McCauley. Teammate Isabella Campbell was runner-up.   McCauley is a 7th grader and Campbell is a 5th grader. She was last year’s county champion.

They qualified for the Arizona State Spelling Bee to be held March 24 in the Phoenix area. The Bee will be broadcast on Public Broadcasting System’s  Channel 8. There were 20 spellers at the Feb. 7 Greenlee Spelling Bee, 10 from Duncan Schools and 10 from Morenci.

Exciting? Indeed it was. The bee’s atmosphere in the Metcalf Elementary School’s Multi-Purpose Room was charged with anticipation, not only among spellers but also the audience. There were many parents present. While none spoke or even whispered a word during the entire event, it was often the expressions on their faces that revealed what was at least some mild anxiety and nervousness.

Adios may have been an easy word to spell but was hardly typical of the other words bee participants were challenged with. Greenlee County Schools Superintendent Tom Powers, who is the Spelling Bee’s director, said 100 words were on the list that faced spellers. He said that was a higher number of words than those used in most past bees.

Participants had no problem hearing Channen Day, a local attorney who has long been the bee’s pronouncer. Few spellers asked for a word to be pronounced again. They did so only to ensure they had heard a word correctly or to give them a few moments more to contemplate the word. A few asked for definitions of a word, particularly of a synonym – a word having the same meaning or nearly the same meaning as another word.

Spellers were allowed two practice rounds. After that, it was do or die.

The sound none of the 20 participants on the MPR stage wanted to hear was the ding of the bell sounded by one of the judges, Grace Nabor. The bell’s sound is very soft but audible enough for spellers to hear and know they would soon be taking seats in the audience.

The Multi-Purpose Room at Metcalf Elementary School was fairly packed with an audience of about 90 people. Besides parents of spellers and other interested parties, there were some toddlers and babes in arms. Powers commented that the spelling bee was very much “a family event. It was really great to see so many folks from Duncan and Morenci out there in the audience, babies and all.”

Many Duncan and Morenci parents, many of whom know each other also made the bee a social occasion. They visited following the competition while they enjoyed cookies and brownies made by the Morenci Schools cafeteria staff.

Powers profusely thanked Nabor, who is Greenlee District 1 Justice of the Peace, Day for his continued participation, as well as two other bee judges, Debbie Thomas of Duncan Schools and Layla Turner of Morenci.

The Greenlee Spelling Bee site alternates every other year. Next year it will be held in Duncan.

Prior to the event’s beginning, Powers read the bee’s rules, which the judges and Day are intimately familiar with as they have served for several of past spelling competitions.

He also stressed to bee participants the importance of having qualified for the county competition. He said that accomplishment alone marked a “real success” in their lives and was a “definite success” in their academic pursuits.