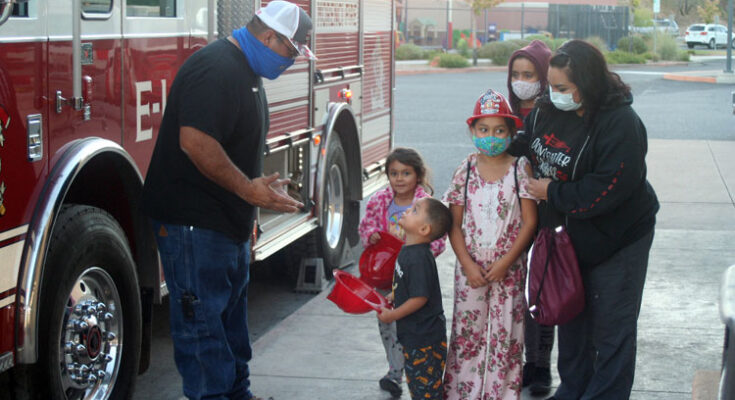 Walt Mares Photo/Gila Herald: The Jessica Meza family is treated to a closeup view of a Morenci fire truck and they were delighted. A Morenci firefighter provided a guided tour of the truck’s exterior and explained its various functions. The children were also given plastic firefighter hats resembling the real ones used by firefighters.

Service and dedication. Add love to that. All three words describe the Morenci Fire Association and its connection to the Morenci community. Firefighting is, of course, Morenci Fire’s most important objective. But wait, there is more.

The MFA is involved with the community in many ways other than the critical service of putting out fires and saving lives. One of those ways is educating the public, youngsters in particular. One such project occurred this week as firefighters made presentations on Halloween safety to students in Morenci’s pre-school, kindergarten, and second and fourth grades.

Students treated to the site of the very big fire engine firefighters brought with them. The size of the vehicle and its big flashing red lights created a great deal of excitement and left students with looks of awe and amazement.

On Tuesday and Thursday firefighters were stationed in from of Bashas’ grocery store. They attracted a great many children and their parents. Children were given light plastic firefighters helmets and a maroon bag full of goodies that included cups, pens, large plastic clasps. The bag was of a heavy grade and had pull strings on it so it could have a variety of uses.

Pamphlets were distributed to adults on critical fire safety, such as how families should deal in the event of a fire in their homes.

All told about 400 bags were distributed to children throughout the week.

At the Bashas’ store, children, some of whom sat in grocery carts filled with groceries as parents provided locomotion, were obviously delighted when they were given a fire helmet and a bag with goodies.

Once again, the big kick for kids was seeing the fire truck. For some, the truck was somewhat intimidating. A child was offered the opportunity to sit in the driver’s seat but declined and instead ran to her mother and clung to mom’s leg. That brought a good laugh from mom and the girl’s older siblings.

Firefighter Brennan Varela put it well when he said firefighters care deeply about their community. “We all care very much. After all, it’s our community and we love it.”

Dedication? All firefighters go through extensive training before they become full-fledged members of the MFA. Their work can involve a great deal of danger. Training involves saving lives especially in the case of victims injured in a fire. They also step up to help local law enforcement in the case of auto wrecks. Firefighters are trained in extracting victims trapped in a vehicle.

Among the crew at Bashas’ was Kami Lemon, a recruit. Also present were Chief Duane Turner, engineer Jaime Diaz, Varela (and son Zarchaes), and Moe Obregon. Which of the MFA’s 25 firefighters participated in Halloween safety activities depended on each members’ work schedule. All work for Freeport McMoran, which owns the majority of and operates the Morenci copper mine. It is the largest operating open-pit copper mine in North America.