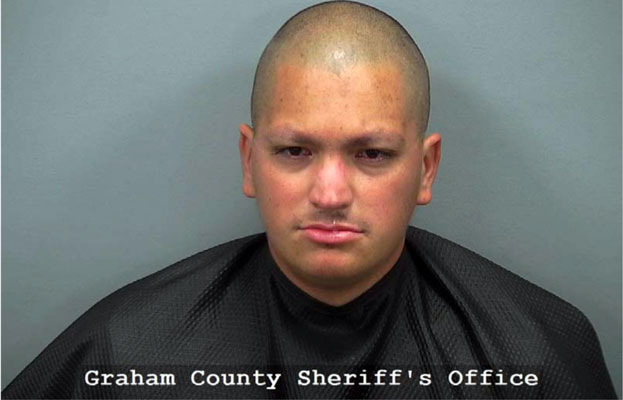 Contributed Photo/Courtesy GCSO: Jimmy Vasquez was busted for shoplifting and possession of marijuana after a brief foot chase.

SAFFORD – A man who allegedly attempted to shoplift more than $1,000 worth of goods from Walmart was apprehended after a brief chase and taken to jail.

According to a Safford Police report, Vasquez and another individual were seen attempting to walk out of the tire and lube entrance with carts full of goods. Vasquez was confronted by a store associate past the point of sale. Once contacted, Vasquez relinquished the cart and briskly left the area. The second male allegedly identified Vasquez to the associate before he was allowed to leave.

An officer located a subject matching the description of the first suspect (Vasquez) running south through a dirt field by the Safford High School. The officer recognized Vasquez from prior contacts and ordered him through his vehicle’s PA system to stop. According to the officer’s report, Vasquez looked back at him and then continued running.

The officer chased Vasquez on foot through the field, ordering him several times to stop, he reported. Vasquez then became tired and dropped to his knees and was taken into custody. At that time, Vasquez was searched and a small amount of marijuana was located in his possession. Vasquez allegedly said he found the marijuana on the ground earlier that day.

After being positively identified by the store associate, Vasquez was taken to jail and booked on the above-listed charges.