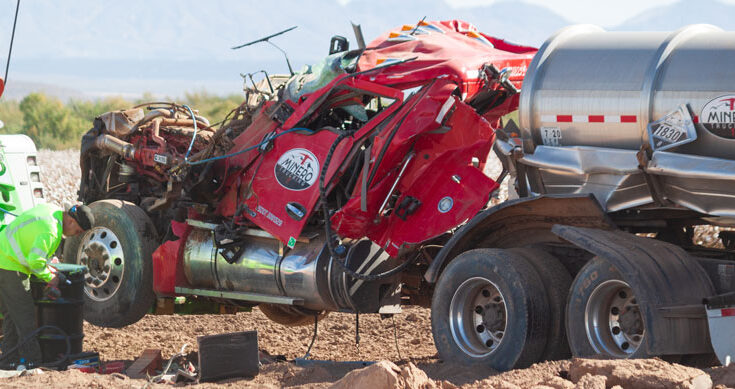 Jon Johnson Photo/Gila Herald: The driver of this tanker truck was flown from the scene and the passenger was transported by ground ambulance after crashing in a field north of U.S. Highway 70 early Saturday morning. The truck spilled sulfuric acid onto the field.

PIMA – A semi-truck hauling a tanker of sulfuric acid went off the highway and crashed into a fallow, plowed field, spilling some of its contents.

According to the Arizona Department of Public Safety, the tanker was eastbound on U.S. Highway 70 when it went off the northern end of the roadway at about 4:18 a.m. The crash occurred just west of milepost 326, which is about two miles west of the Pima Town limits.

The tanker, which is from Minero Trucking based out of Phoenix, narrowly missed a residence, crashed through a yard and tree, and then landed on its side in a barren, plowed field.

The tanker spilled a quantity of its sulfuric acid, however, since it made a depression in the dirt and was on its side, all of the acid went right into the hole.

Minero Trucking CEO Xavier Ortega told the Gila Herald that no acid was spilled on the roadway and that the crash is still under investigation.

“We’ve got some preliminary information but we can’t release that until the police report is done,” Ortega said. “So, we’re just crossing our fingers that it works out (for the driver).”

A HAZMAT team from Emergency Environmental Services LLC, based out of Mesa, arrived at the site to take care of the spill. According to the Centers for Disease Control and Prevention, sulfuric acid is a corrosive substance that is destructive to the skin, eyes, teeth, and lungs. The stretch of highway is regularly utilized to haul sulfuric acid from Miami to either the Safford Operations or Morenci Operations of mining giant Freeport McMoRan Inc.