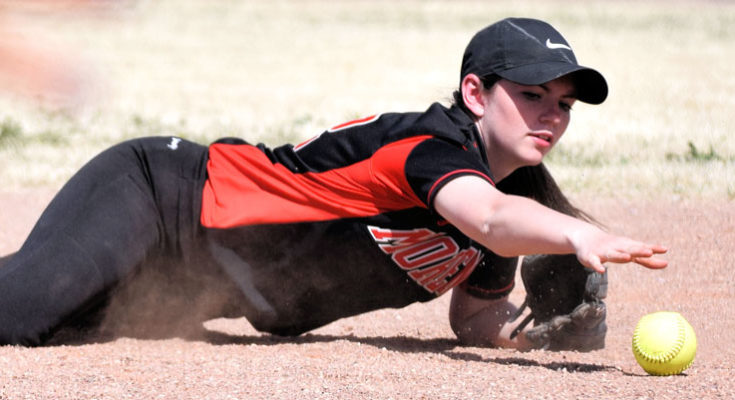 The Joseph Garcia-coached Wildcats opened the season with a run-ruled 10-0 road win in Pima on Feb. 26; fell 3-1 to San Manuel, downed Winkelman Hayden 6-2, and were edged 6-5 by St. Johns in day one of the Safford Invitational tourney pool play March 2.

San Tan Valley Combs slipped past the Wildcats 7-5 to conclude White Pool play; and Morenci came from behind to defeat Safford in the bracket play pairing of fourth-place pool teams March 3.

Blue Ridge reached the finale with a 9-2 win over San Manuel, while Combs edged Snowflake 2-1 in the semifinals.

The seeding rounds ran from Friday morning through Saturday morning. The top two teams from both pools qualified for the championship bracket, while the third-, fourth-, and fifth-place teams were in the consolation bracket Saturday afternoon.

In the circle, Rodriguez (3-3) struck out one, walked one, and yielded five hits while facing 22 batters during four innings.

Second batter Ontiveros started the scoring on a 2-run home run during Morenci’s initial plate appearance, Combs used a one-out double to tie it at 2-2 in the second and added five more in the third, and Morenci added three in the bottom of the third. Time expired before the Wildcats could bat again, ending with a 2-run loss.

St. Johns tied the score at 4-4 in the fourth inning, using a two-out single plus consecutive doubles to drive in two runs.

Aguilar singled in a doubled Rodriguez to give Morenci a tie-breaking run in the fifth, but the Redskins used a one-out single and fielder’s choice to get two runners on, and back-to-back singles to drive them in before time expired.

Morenci broke the 0-0 deadlock with three runs in the second. Aguilar singled on, Leonard singled on and Apodaca walked to load the bases. Aguilera singled in Aguilar and both Leonard and Apodaca scored on passed balls. St. Johns added a run in the second, Morenci’s fourth run crossed the plate on an error after a two-out walk, and a two-out single drove in another run in the third for St. Johns to trail 4-2.

Morenci erased a 2-run deficit during its first at bat, tying the score on a Rodriguez one-out 2-run home run. A lead-off Ontiveros home run broke the tie and a two-out Aguilar single drove in a singled Cueto in the fourth, and a one-out Ontiveros fifth inning 2-run home run completed the scoring.

Hayden scored on a one-out double and single, and was limited to five base runners, three of whom were thrown out trying to advance to the next base, during the rest of the game.

Rodriguez struck out seven, walked one, and yielded five hits while facing 21 batters during five innings.

Morenci broke a scoreless tie in the fourth inning with a walked Rodriguez driven in on an error while San Manuel countered with two runs scored on a one-out triple and a third run scored on an error. A called third strike and ground out sent the Miners into the field.

A two-out ground out left two Wildcats on in the fifth to end the game.

Rodriguez struck out four, walked one, beaned one and yielded three hits while facing 15 batters during four innings.

Waddell struck out nine, walked one, and allowed two hits while facing 21 batters during four innings.

Following two scoreless innings of play in the season opener, the Wildcats sent 13 batters to the plate in the third, scoring nine runs before the third out was recorded. Chavarria singled in lead-off singled Silvester, Ontiveros drove in three runs on a home run, a bases-loaded two-out Lindsey single drove in two runs and a passed ball allowed her to cross the plate, a passed ball score a singled Silvester, and a Rodriguez double drove in a singled Chavarria. A ground-out sent the Wildcats on defense.

Garcia doubled in a singled Aguilar with one out in the fourth and both teams went three up and three down in the fifth.