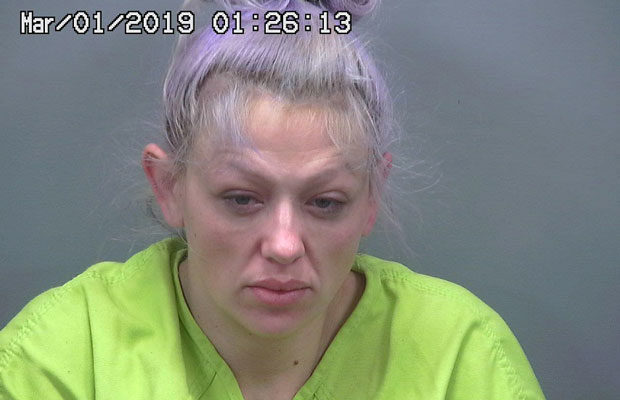 Contributed Photo/Courtesy GCSO: Dixie Williford, 36, was booked into the jail on multiple warrants after refusing to pay a motel bill.

SAFFORD – Skipping out on one’s hotel bill while having active warrants for her arrest resulted in a jail stay for Dixie Ann Williford, 36, of Thatcher.

Williford was arrested and booked into the Graham County Adult Detention Facility on Thursday, Feb. 28, on three active warrants out of Ajo relating to drug charges, disorderly conduct, and shoplifting, as well as two local warrants in Graham County for shoplifting.

According to a Safford Police report, an officer was initially dispatched at about 4:31 p.m. to the Copper Canyon Motel at 450 Entertainment Ave. regarding an unwanted subject. According to motel staff, a woman, later identified as Williford, had stayed in her room four hours past the checkout time of 12 p.m. and refused to pay for the additional day.

The officer came upon Wiliford in the room and she allegedly identified herself as Dixie “Roland” and said she was unsatisfied with the motel service and was leaving. A man, later identified as Timothy McClellan, was seen standing behind Williford. She allegedly advised she didn’t know him but that he was giving her a ride.

The officer then returned to the front desk and checked the registry for the room, which was listed as being checked out to Dixie Williford. At that time, the clerks also advised that the man who had come to give Williford a ride was pacing around the lobby and said that the Vicodin pills he had taken had made him “all hot.”

By that time, Williford and McClellan had left the premises but were soon located at a nearby Giant gas station. Williford initially refused to exit the locked car, but eventually did after covering up a purse on the floorboard.

Williford then struggled with officers as she was being placed under arrest, according to the report, and a positive match was made to her active warrants from her driver’s license. A search of the purse also yielded a syringe with brown liquid believed to be a mixture of heroin and various forms of drug paraphernalia.

Williford initially advised that she doesn’t use heroin anymore then, after the officer noticed what appeared to be fresh injection marks on her arms, she said she last used four or five days ago. She said was going to pay McClellan $100 to take her to Tucson so she could handle her warrants out of Ajo.

McClellan was found in possession of drug paraphernalia as well and said that he didn’t use heroin anymore but had planned on relapsing with Williford on the trip to Tucson. McClellan was given a citation for possession of drug paraphernalia and was released. During the police interaction, McClellan’s brother had passed by and noticed McClellan with the officers. The brother stopped at the scene and McClellan’s vehicle was eventually released to him.

Williford was then taken to the jail and booked on her warrants without further incident.