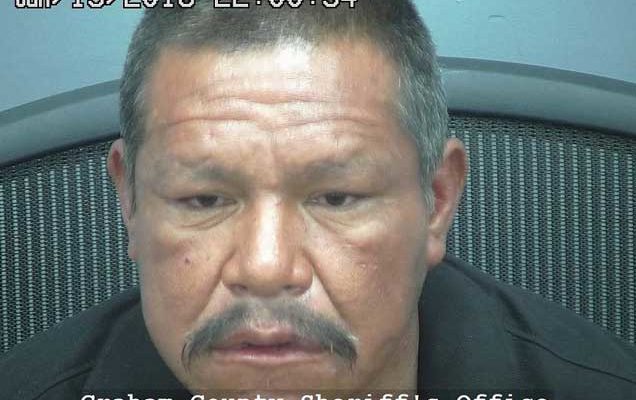 Contributed Photo/Courtesy GCSO: Rodriguez Kindelay was booked into the jail on his warrants after allegedly harassing people for money at Circle K and drinking beer in the park early Tuesday morning.

SAFFORD – A homeless man was arrested on three warrants at Firth Park after he allegedly harassed people at the Circle K across the street.

According to a Safford Police report, an officer was dispatched Tuesday, June 19, to the Circle K at 1123 Thatcher Blvd. at about 6:19 a.m. after a Native American male reportedly was observed begging for money and opening customers’ vehicles. The man, later identified as Rodriguez Ryman Kindelay, 43, of Bylas, had already been previously trespassed from the store.

Upon arrival, an employee pointed out Kindelay, who was by then at Firth Park. The officer contacted Kindelay and retrieved a “tall boy” can of Busch beer, which was already open. The officer poured out the beer.

Kindelay was then booked on his warrants, including failure to appear in court and failure to pay regarding a shoplifting fine. He was also given a citation for violating city code of having alcohol in the park and had a charge of criminal trespass in the second degree filed against him the next day.

According to the Graham County Adult Detention Facility booking department, Kindelay was given a five-day sentence on his warrants Monday.

Also on Monday night, at the end of the Safford City Council meeting, Vice Mayor Richard Ortega inquired about how the city could better clean up Firth Park from the number of vagrants who utilize the park, especially the bathrooms. The Gila Herald recently reported on another article in which a couple was caught injecting heroin in the men’s restroom. Read that article here.

Safford Police Chief Joe Brugman informed the council that they make sure the homeless population is not impeding the use of the facilities but unless they are committing a crime they cannot physically remove them from the park without justification.

Safford Mayor Jason Kouts asked the city’s information technology (IT) department could increase the park’s video surveillance system by adding a camera pointed at the front of the restrooms to discourage misuse. The park already has cameras strategically placed in other areas that can be accessed by officers through their own devices.

After receiving confirmation, Kouts instructed to move forward with the additional camera installation.