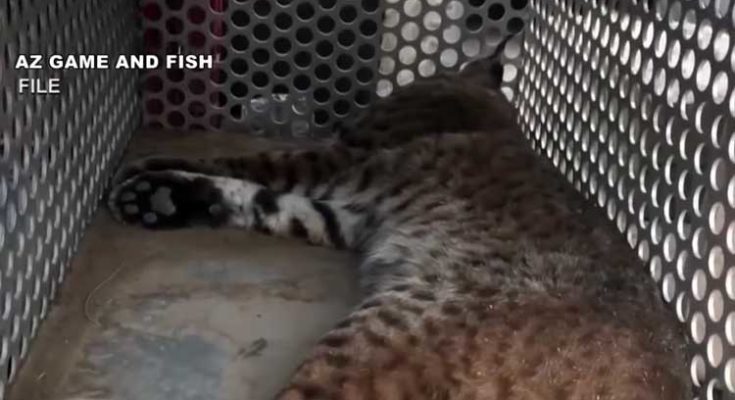 Contributed Photo/Courtesy AZ Game and Fish: Officials with the Arizona Game and Fish Department euthanized a bobcat that was suspected of attacking a Bisbee man Sunday. They believe the animal was infected with rabies.

COCHISE COUNTY – A bobcat that was suspected of attacking a Bisbee man was located in the same location Sunday night and has been euthanized.

According to the Cochise County Sheriff’s Office, the man was attacked by a bobcat early Sunday morning near the intersection of Della and Barnett Street while walking his dog. The area is just off the Naco Highway.

The victim allegedly informed deputies that he let go of his dog when the bobcat approached and the dog ran home.

According to Mark Hart of the Arizona Game and Fish Department, the man was savagely attacked by the bobcat until his wife arrived in her car and utilized the vehicle’s horn to scare the animal and allow the victim to escape.

The injured man was taken to a local hospital with significant injuries to his left arm, including his bicep and forearm, but was released the same day. However, he reportedly is still undergoing treatment for rabies.

The male bobcat was significantly underweight – about 20 pounds – and officials strongly suspect it was afflicted with rabies. The body was taken to a Department of Health Services lab in Phoenix for rabies testing.

“Among the 90 cases confirmed in Arizona in 2018, more than half are in southeastern Arizona,” Hart said in a television interview. “We’re at ground zero in some of this stuff.”