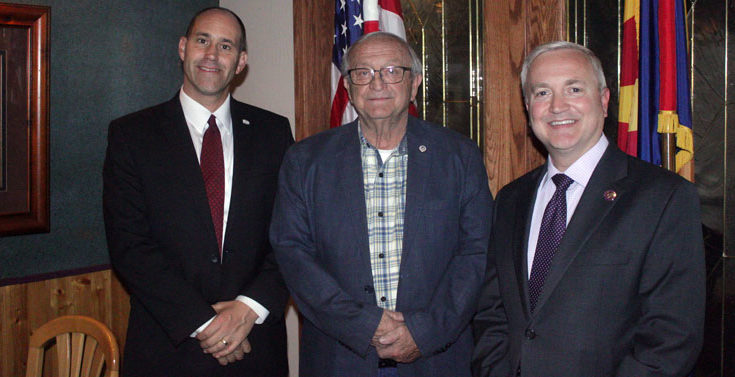 SAFFORD – Eastern Arizona College President Todd Haynie stopped by the monthly Graham County Republican meeting at the Manor House on Friday, May 3, for some good talk and good grub.

Haynie wasn’t the only “college man” in the room, as Ethan Orr, governmental relations with the University of Arizona, also spoke at the event and espoused praise upon EAC for its students’ development and overall excellence.

Haynie took the time to introduce himself and gave a bit of his own history, growing up in Thatcher and Morenci (with a bit of Payson thrown in during eighth grade). Haynie graduated from Thatcher High School and then graduated from EAC and Brigham Young University, followed by yet another degree from Northern Arizona University.

Haynie started in the Admissions Office at EAC and, after three years, he was promoted to the Marketing and Public Relations Office, where he spent the next 15 years as its director.

When former EAC President Mark Bryce decided to retire, Haynie was “talked into” applying for the job as president.

“I really felt, then, that it was a long-shot for me, but after consideration and prayer, I decided to go ahead and throw my hat into the ring. Now, of course, I’m grateful that I did because I was lucky enough to be selected to lead the institution that has been such a large part of my upbringing and really who I am today.”

Several prominent local officials and business leaders were at the luncheon to see Haynie, who was the first EAC President in longer than anyone could remember to speak at the event.

After his introduction, Haynie spent the next 20 or so minutes lauding the college and its services as well as the benefits of being in a rural community. After which, he took questions from the audience.

“A few months ago I heard this statistic that was a little bit interesting to me,” Haynie said. “And that was that 80 percent of Americans have never seen the Milky Way (galaxy). I’m not talking about the candy bar, I’m talking about the galaxy. We have so many people in this country who live in urban areas that are not – for whatever reason, light pollution, call it what you want – they can’t see that. Now, here in rural America, here in rural Arizona, you can see the Milky Way when you go outside. You can get a perspective in a rural area that you can’t get in a city, that you can’t get in an urban area. So, many people think that ‘well, I’m going to college, I’m going to a university, I’m going to need to go to an urban area to get that education and get those experiences. Believe it or not, people choose to come here to receive their education because they get a perspective that you can’t get anywhere else.”

Roughly half of EAC’s full-time student population come from outside its three-county (Graham, Greenlee, and Gila) service area. EAC also has partnerships with Arizona State University and NAU to offer baccalaureate degrees without having to leave the college.