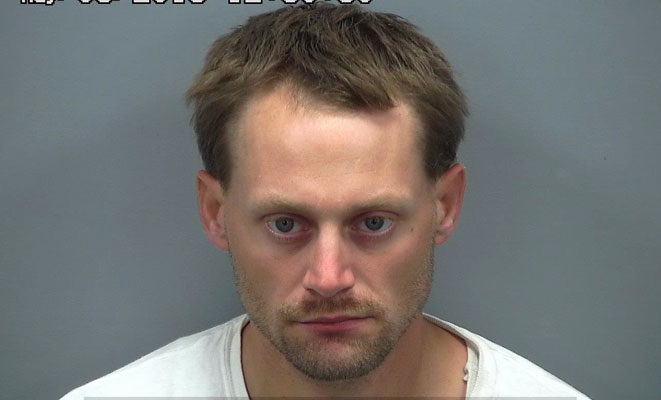 Contributed Photo/Courtesy GCSO: Cory Bowman, 29, was sentenced to seven years in prison followed by an intensive probation tail for stealing ATVs and operating a chop shop.

SAFFORD – Cory Mitchell Ken Bowman, 29, of Pima, was sentenced Monday to seven years in prison to be followed with an intensive probation tail.

Graham County Chief Deputy County Attorney L. Scott Bennett prosecuted the case and said he was pleased the court agreed with him on the length of sentence.

“People should not have to worry about waking up to find their property missing,” Bennett said. “The way we keep property safe in Graham County is by sending the message that the cost of stealing is way too high. I think seven years sends that message.”

Bowman previously took a plea agreement in February and pleaded guilty to two counts of theft of means of transportation – Class-3 felonies – and conducting a chop shop – a Class-4 felony.

The charges stem from two separate incidents in Pima, in which Bowman was found in possession of stolen ATVs. In the second instance, which occurred Feb. 15, Bowman was also charged with operating a chop shop.

According to Pima Police reports, the first incident was reported Sept. 28, 2018, and regarded the theft of a Honda 400EX ATV. The victim advised the vehicle was stolen from her home from its parking spot behind a block wall with metal gates.

The victim’s son advised he believed Bowman had stolen the ATV because he had twice refused to sell it to him.

Officers checked a residence where Bowman was staying and found a shop with multiple ATVs and an ATC in various stages being torn apart. The Honda 400EX was also located there and Bowman was arrested for theft of means of transportation, burglary in the third degree, theft, and criminal trespass in the first degree.

Five months later, officers returned to the same residence; this time looking for a stolen blue, 2008 Yamaha 350 Raptor. The stolen ATV was located and had begun to be repainted with black spray paint and had its VIN rubbed off. Numerous other ATVs were also located in various stages of being torn down.

At that time, Bowman insisted he didn’t steal the Yamaha, but a friend of his had paid him $300 to fix it up and paint it.

According to Bowman’s plea agreement, sentencing on the first count of theft of means of transportation was up to the judge and could have ranged from probation to a prison sentence of a mitigated minimum of two years to an aggravated maximum of 8.75 years. At sentencing, Graham County Superior Court Judge Michael D. Peterson sentenced Bowman to a maximum sentence of seven years. The other two counts were stipulated in the plea agreement as being a stipulated term of intensive probation.

“I thought the seven-year sentence was appropriate when I recommended it to the court, and I am grateful Judge Peterson gave such a harsh sentence,” Bennett said. “I hope it will make a would-be thief decide it is just not worth it before he or she decides to steal an ATV.”