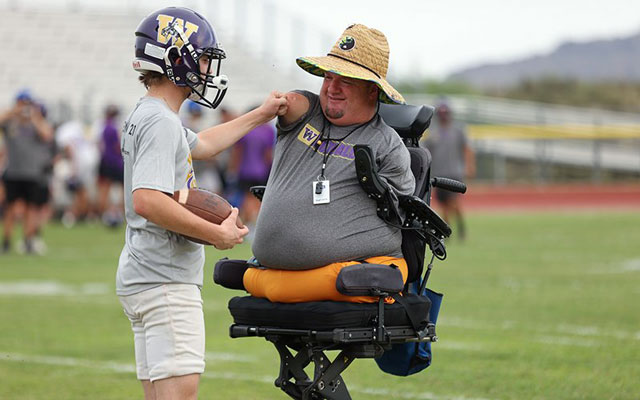 Photo by Grace Edwards/Cronkite News: Wickenburg assistant coach Carter Crosland, who was diagnosed with Tetra-Amelia syndrome at birth, takes a 40-minute ride on his motorized wheelchair to football practice.

WICKENBURG – On a steamy Thursday afternoon at Wickenburg High’s Wrangler Stadium, Carter Crosland is parked on the football field beside his players. The Wranglers’ football assistant coach observes practice in preparation for an upcoming game but keeps his interaction to a minimum unless a player hangs off Crosland’s motorized wheelchair to catch a breather from the intensity of drills.

Time passes, and he taps a touchpad positioned by his right shoulder to change coordinates on the field as the practice unfolds in front of him. This is life for Crosland, who doesn’t have limbs, and he loves it.

Crosland was diagnosed at birth with Tetra-Amelia syndrome, a rare disorder characterized by the absence of all four limbs. But despite Crossland’s challenges, he is confident and proud and has shown a resolve to live a fulfilled life despite his disabilities.

A loving family along the way certainly helped him. Growing up in Utah with a family full of athletes, Crosland was introduced to sports at a young age. His cousin doubled as a varsity quarterback and wrestling champion, while his grandfather was a wrestling champion and played college football.

It’s no wonder Crosland competed in wrestling and traveled with his high school football team as an honorary member. Through the experience, Crosland developed a deep admiration for his coaches and, in turn, discovered his true calling.

“When I got to high school, the coaches I had were awesome,” Crosland said. “They kind of put me on the path to coaching and I knew this is where I can make an impact in sports and in coaching.”

Crosland decided to move with his wife and two children from Utah to Wickenburg in August of 2021 and made an immediate impact on the community upon arrival. He started coaching football for 11- and 12-year-olds, which led to an opportunity to join the Wickenburg High football staff as a running back and linebackers coach in June.

That was the easy part. The daily challenge is traveling to the practice field during the week.

Crosland rides about 40 minutes on his motorized wheelchair from his home to the field in the brutal Arizona heat. He remains unfazed by his long commute and committed to helping his team at all costs.

“He always comes out here every single day,” said Jaxson Hone, backup quarterback for the Wranglers and Crosland’s cousin. “No matter the heat, no matter if it’s raining, he goes and sits over there. He doesn’t go home. He stays here with us through everything. It’s just amazing how he’s always here.”

On top of his football coaching gig, Crosland also works as a landscape designer from home. He is determined to never make excuses for himself and to put maximum effort into every task, no matter how small.

“He never quits, Never says you can’t do anything,” said Wranglers defensive tackle Carson Hone, who is another cousin of Crosland. “He just never stops. He’s always going.”

Crosland enjoys being an assistant coach for the Wranglers, who are 2-3 heading into Thursday’s home game against Mohave, but his aspirations go deeper. Eventually, he hopes to become a head coach for a high school football program. After all, coaching football has been a huge part of Crosland’s life. It has not only allowed him to build strong relationships but helped shape him into a better person.

Crosland’s presence around the team inspires the players and motivates them to go above and beyond on the football field. He’s also a jokester, always lightening the mood at practice. He hopes to be a light in the world and unite people despite their differences.

“There is so much negativity in the world, and you have to be a light and to be a person that can spread positivity even if it’s just a little bit,” Crosland said. “Everybody has their challenges, everybody has their stories. Some people’s challenges are a little more obvious than others, but we are all a lot more alike than we are different.”

After everything Crosland has accomplished without limbs, his example is more reason for his players to succeed. If Crosland can work full-time while handling the responsibilities of football, the sky’s the limit for what the Wranglers’ players can achieve on the field.

“There are hard days obviously, but for the most part it’s awesome,” Crosland said. “ The kids are great and they know we are trying to do something special here, so to be a part of it is great.” 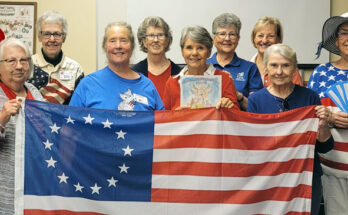