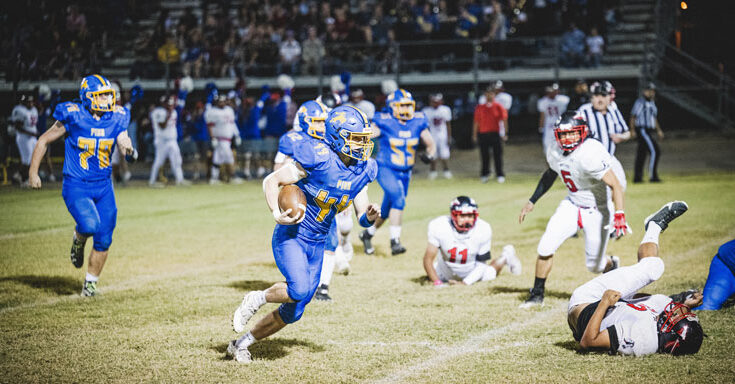 Photo By Steve Carter: Wyatt Wiltbank breaks one around the corner for a score. Pima defeated San Carlos 54-0.

MORENCI/PIMA –  The undefeated No. 1-ranked Morenci Wildcats and the No. 2-ranked Pima Roughriders continue their dance toward destiny and the teams’ final regular season game against each other on Oct. 28.

For the season, Morenci has scored 251 points while only allowing 20 (14 of them in the Willcox game alone.)

In Pima, the Roughriders (1-0 region, 5-1 overall) continued their dominance over the 2A landscape with a 54-0 victory over the visiting San Carlos Braves. The win is Pima’s third shutout of the year.

The Roughriders have scored 207 points compared to giving up 43 (19 of them in the loss to number 1 in 3A Thatcher, its lowest offensive output of the season.)

Pima will head out to Globe next Friday, Oct. 7, before having two home games – San Tan Charter (Oct. 14) and Miami (Oct. 21). The Roughriders will then finish the regular season climbing The Hill in Morenci on Oct. 28 – possibly for the 2A Salt Region Championship.