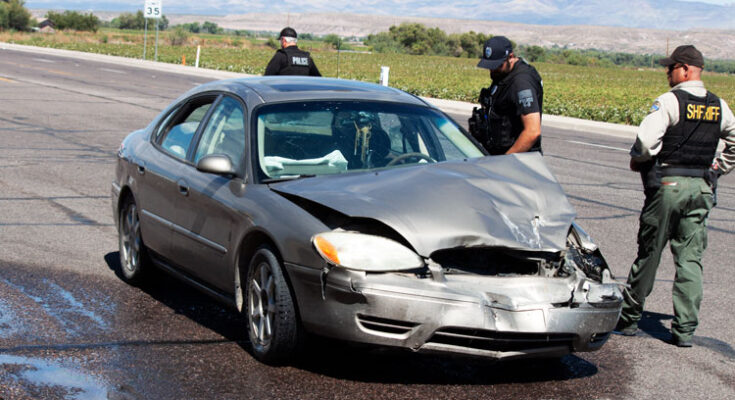 Jon Johnson Photo/Gila Herald: Officers examine a crash scene in Pima on Friday morning. Three occupants of the car were taken to MGRMC.

PIMA – A two-vehicle collision in the area of U.S. Highway 70 and the intersection with 200 South (just east of the Speedway gas station at 325 E. Highway 70) ended with three occupants of one car being transported to the hospital Friday morning.

The area is the site for a proposed entrance to the north of Highway 70 to be used to enter the new Pima High School slated to open in fall 2025. Currently, 200 South ends at the highway, but with an extension into the new high school, talks have begun about possibly having a traffic light placed at the intersection when that occurs.

Pima Police and Graham County Sheriff’s Office were joined at the scene by Pima Fire and Lifeline Ambulance.

Three occupants of the vehicle with the badly damaged front end were transported to Mt. Graham Regional Medical Center for treatment, according to Pima Fire Chief Scott Howell.

The crash is under investigation by the Pima Police Department.