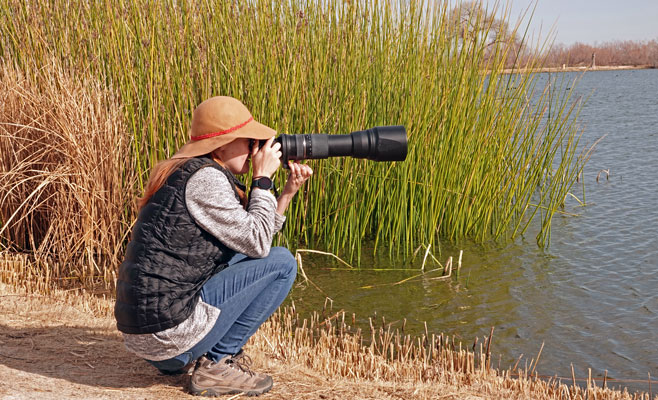 Photo By Diane Drobka: A participant in the Wings Over Willcox tour focuses on feeding Northern Shovelers at Dankworth Pond.

GRAHAM COUNTY – The recent Wings Over Willcox Birding and Nature Festival included Friday and Saturday tours to Roper Lake and Dankworth Pond, and between the two locations, more than 40 species of birds were observed.

One of the highlights at Roper Lake was a flock of 15 Canada Geese and three Snow Geese that were observed on the lake in the early morning, then later in flight.

“While Canada Geese are numerous in many areas, they aren’t commonly seen here in the Gila Valley,” said tour co-leader Craig Wilcox. “An injured Canada Goose has been at the Graham County Fairgrounds main pond for several years now, and used to be listed on the Arizona Rare Bird Alert,” he added.

“We were able to locate a few southwestern species that were new for several birders on the tour,” said leader Camden Bruner, a wildlife biologist with the Tonto National Forest. These included Verdins actively feeding in the tamarisk trees on “the island” and a Gila Woodpecker. Male and female Ladder-backed Woodpeckers and a male Phainopepla, a shiny black bird with red eyes, were seen near the Dankworth parking lot. One participant mentioned that she added six new species to her life list.

“We hope that we can return to our full pre-covid slate of tours and once again host the Saturday banquet with keynote speaker,” said festival coordinator Homer Hansen.

Mark your calendars now and plan to attend.