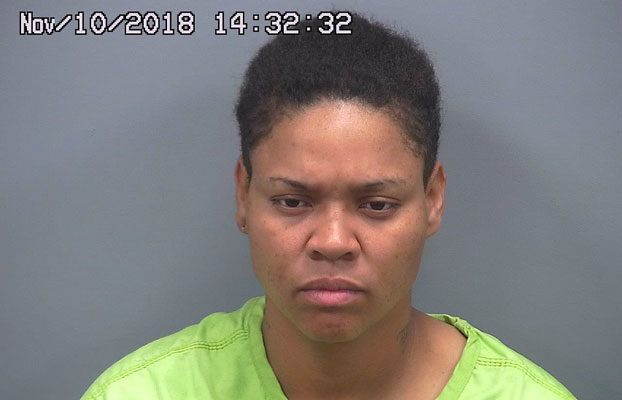 Contributed Photo/Courtesy GCSO: Darline Smith, 29, was booked into the jail after a wild night involving threatening with a knife, self-injury, and biting an ER staff member.

SAFFORD – A woman apparently under the influence of methamphetamine threatened her sisters with two knives, cut her own hand on accident, asphyxiated herself with a police vehicle’s seatbelt and then topped off her night with biting a healthcare worker before being booked into the jail.

The night actually began in the early morning of Dec. 30, 2018, when officers were dispatched to 900 E. Hollywood Rd. at about 12:09 a.m. regarding a fight in progress involving a woman with a knife. Upon arrival, one officer pointed a 40 MM rubber projectile gun at the woman, while another drew his TASER and a third drew his duty weapon. The suspect, later identified as Darline Smith, 29, was bleeding from her hands while also sweating profusely and talking quickly and erratically, according to a Safford Police report.

One of the victims advised that Smith had arrived high on meth and began causing a disturbance. The victim said Smith agreed to be driven to her mother’s residence, so the victim and another woman got into an SUV to take her and Smith brandished a knife at them. The victim pulled over and she and the other woman retreated to the original residence on foot with Smith following while continuing to brandish the knife, according to the victim’s statement to police, which was corroborated by the other victim.

A search of the area was performed and an officer located two knives together behind a trash can. One of the knives matched the description given by the victim. Both knives, a black switchblade and a silver knife, had fresh blood on them. A backpack belonging to Smith was also located in the SUV and it had additional knives, a BB-gun that was a replica of a .357 Magnum revolver, and a metal pipe with apparent marijuana residue.

After being treated for by paramedics from Lifeline Ambulance for lacerations to her hands, Smith was placed under arrest for disorderly conduct with a  deadly weapon/domestic violence and was transported to the jail. However, during the transport, she managed to wrap the patrol vehicle’s seatbelt around her neck to the point where it caused her to asphyxiate.

The officer noticed what Smith had done when he arrived at the jail and immediately freed her of the seatbelt. He then drove to the Mt. Graham Regional Medical Center with his lights and siren on to save Smith from further injury. On the way there, however, Smith again managed to wrap her head around the seatbelt and was unconscious upon arrival.

Emergency Room staff performed cardiopulmonary resuscitation (CPR) on Smith and revived her to where she had a pulse and was breathing on her own.

While ER staff continued to evaluate Smith, she became combative and bit a hospital staff member on the arm. She was eventually restrained to a hospital bed.

At about 5 a.m., Smith was medically cleared from the hospital and was transported to the jail even though she was still unconscious. The ER doctor informed the officer that Smith was responsive to pain stimulus and ammonia scent and was cleared for the jail.

She was then booked into the Graham County Adult Detention Facility on charges of disorderly conduct with a deadly weapon/domestic violence, misconduct with a weapon since she was a prohibited possessor felon, possession of drug paraphernalia, and aggravated assault on a healthcare professional.