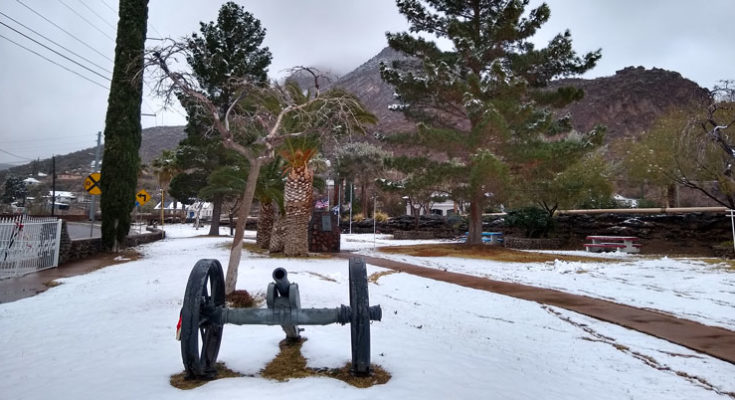 Photo By Susan Breen: Veterans Park in Clifton stands out all the more after a Jan. 2 heavy snowstorm. Despite the cold, several people were seen visiting the various veterans’ memorials in the park.

The Black Hills are anything but black. They became and remain quite white after a heavy snow fell in large parts of Greenlee and Graham counties early Wednesday morning, Jan. 2. It snowed so heavily that part of the highway between Safford in Graham and Three-Way in Greenlee was closed for hours on Wednesday morning.

Wait, there is more.

The heavy snow also hit Clifton-Morenci. For most people waking up to see their front yards and streets covered with white stuff was quite an unusual occurrence. It has been at least two years since people have awakened to such a sight.

There was a heavy snowstorm in mid-January 2017. But did not fall in the lower elevations of Greenlee County. It fell in the higher elevations of the Morenci copper mine and above it in the Apache National Forest.

For some, especially those who live in Safford and work at the Morenci copper mine, Wednesday’s storm created some real difficulties such as getting to work. That was compounded by the closing of U.S. Highway 191 that runs through the Black Hills, which is the route usually taken by those traveling to and from Safford to the Morenci mine.

Traffic was rerouted through Duncan, located on U.S. 70, in southern Greenlee County. Going that route from Safford to Morenci takes significantly more time.

For many, the snow created a most welcome change in the appearance of Clifton-Morenci and its surrounding hilltops and mountains.

“It’s beautiful, a beautiful,” John Armstrong said late Wednesday afternoon. Armstrong, a Morenci native, added, “It seems like it’s been such a long time, too long, to see the beauty we’re seeing today. It’s been so dry around here. Obviously, I’d like to see more of this.”

It has been a long dry spell in Greenlee and neighboring Graham. Rain has been rare in spring, summer, and fall.

Even a Colorado native who has lived in Arizona for several years and claims to despise snow, sounded as if he had warmed to Wednesday’s snowfall. “I’ve got to admit it’s downright pretty. Not having to go out and work or travel  in it for me makes a big, big difference.”

The man said that despite the snow, he figures the traveling for motorists must have been pretty safe going. “I didn’t hear very many sirens Wednesday morning, so I figured there weren’t many, if any, emergencies like a car crash or something of that nature.”