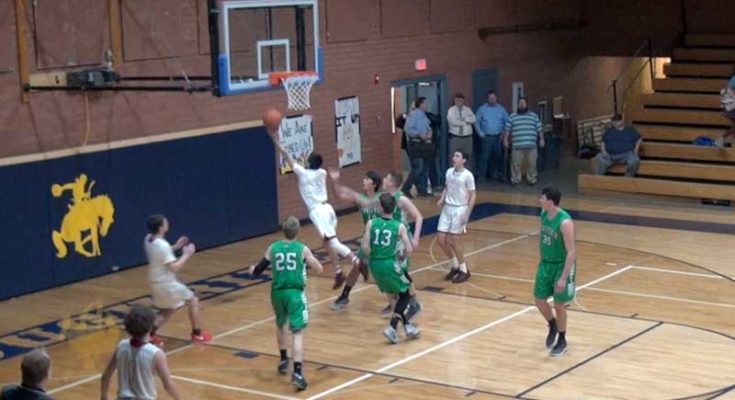 Jon Johnson Photo/Gila Herald: Jordan Leonard goes up for two in the 2A East Regional semifinal. Morenci came back to beat Thatcher, 77-67.

“We did it together,” Morenci head coach Patrick Hepper said. “When we play together and we play with energy, we’re a very, very dangerous team.”

Trailing by 6 points at halftime, Morenci had to do most of its comeback without its starting center, John Olmsted, who sat the entire third period and half of the fourth period after garnering four fouls in the first half, including a technical foul.

“I think we ended up playing close to 13 minutes without him,” Hepper said. “We had things rolling, so we just kind of left him on the bench.”

At one point early in the fourth, Olmstead was at the scorers’ table after Thatcher began to take advantage of the lane against Morenci’s zone defense and had tied the game at 56. But the Wildcats hit three straight 3-pointers as part of an 11-0 run to go up 67-56 and Olmsted was sent back to the bench.

He returned to the game a short while later and then made perhaps the play of the game as Thatcher’s Rulon White headed in for a layup only to have his offering swatted off the backboard by Olmsted. Morenci’s Diego Mendoza gathered the block and found Jordan Leonard for a fast-break layup and instead of being 69-66 Morenci led 71-64 with just 1:15 to play. The Cats then hit six straight free throws down the stretch to ice the game.

“I thought our kids played really well for the most part in this game,” Thatcher head coach Chris Riehemann said. “At the end of the day, they just made a few more plays than we did.”

While Mendoza only had 1 point in the first half, he stepped up his defense in the second half, which led to offense as he made steals that turned into fast-break layups on multiple occasions. Mendoza finished the night with a game-high 21 points.

“My teammates help me get better as a defender,” Mendoza said. “It’s a great feeling. When everyone is yelling in the stands, it’s a great environment.”

Thatcher came out strong in the first period and left with a 16-10 lead on buckets from Cole Motes and 3-pointers by Rulon White and Brock Layton. White had a superb game and led Thatcher in scoring with 21 points, hitting five 3’s along the way. Matthew Palmer struck from deep three times in the fourth period and finished with 15 points for Thatcher’s second-leading scorer.

Morenci sunk 10 3-pointers on the night, with six of them coming from Dominik Waters, who was a perfect 4-4 from deep in the first half and finished 6-11 on the night and had 20 total points.

“My guys set screens and I just kept getting open,” Waters said. “It was a team win. We all had a part in it.”

Morenci will face Pima in the championship game Friday night starting at 7 p.m. in Pima.