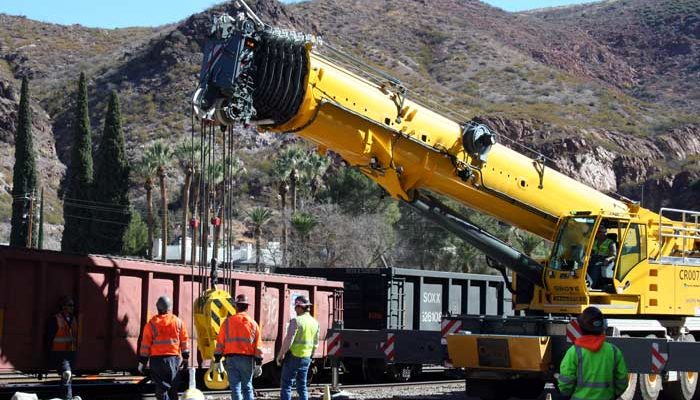 Photo By Walt Mares: A huge crane prepares to lower its boom to place two gondola cars back on track after they derailed in Clifton on Friday morning.

Does history play a part because of infill?

CLIFTON – The canary-yellow machine was not just big, it was very, very big. It became even larger as it extended its arm and prepared to drop the boom on two derailed railroad gondola cars that sat slightly askew from the other gondolas that trailed them.

The derailment occurred at the end of a switching yard near a railroad crossing by Veterans Park in Clifton. It happened around mid-morning Friday, Feb. 9. No one was injured nor id the derailment affect the flow of traffic on U.S. Highway 191 North, which runs parallel to the tracks.

What was an attention-getter for those who passed by was the big crane and its bright yellow color. There were also several railroad workmen and their pickup trucks parked safely away from the tracks. Workers were with the Arizona Eastern and Freeport McMoran railroads.

The switching yard, located next to the Old Clifton Train Depot, accommodates both railroads as they AZER hauls equipment and other goods that the FMI RR delivers to the FMI Morenci copper mine. In turn, the FMI RR brings processed material and other items to Clifton from where the Arizona Eastern hauls it to other destinations.

The Morenci facility is the largest open pit copper mine in North America. FMI is one of the worlds’ largest mining companies. Morenci is considered FMI’s flagship mine. It provides the chief economic base for Greenlee County, in which Morenci is located. The mine also has a major economic impact on neighboring Graham County.

Most of the crowd of workmen were able to leave the derailment scene after about three hours when details of the plan and efforts to place the gondolas back on track were finalized.

Does history play a part?

Over the years other minor derailments have occurred in pretty much the same area of the switching yard. The yard and the train depot were built on fill. That is the area was once a part of the San Francisco Riverbed. That infill was accomplished in the early 1900s. the train depot was built in 1913.

In the 1990s, the late Al Fernandez, who was Greenlee County’s official historian, said in the infill was accomplished nearly a century ago (now more than a century has passed), Even so, it would be no surprise if the fill had not yet completely settled and there might be some small areas around the train depot and switching yard that had not yet become completely and firmly settled.

Fernandez pointed to the floor in the train depot’s main waiting room. The floor is laid out in large rectangles. Some of the floor sections are slightly higher than other sections. There is not enough height difference to cause someone to trip on a crack, but the differences are noticeable with the naked eye.