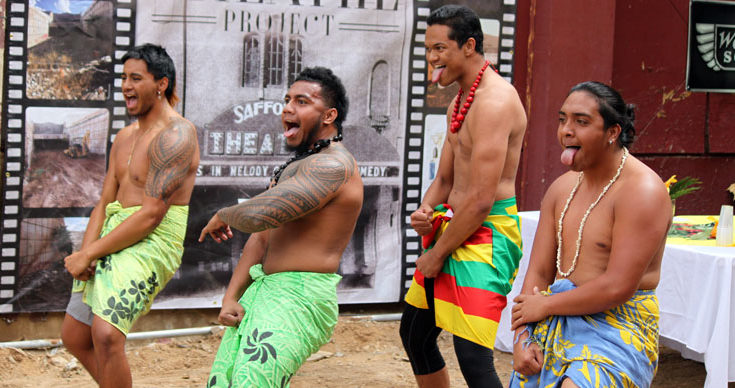 SAFFORD – To the naked eye, the venue at the currently under renovation Safford Theatre and the winners of the 2018 Best of Safford Awards appeared to be roughly the same as last year; and it was and they were, except that it isn’t and they weren’t.

The 14th annual Safford Downtown Association Best of Safford Awards Appreciation Luncheon was held at the Safford Theatre on Tuesday and while the theatre has a ways to go before becoming a functional open-air theatre, there have actually been numerous strides.

While the Safford Downtown Association had hoped construction to be complete by now, Graham County Supervisor and Safford Downtown Association President Danny Smith reported that the project is about four months behind schedule and he is hopeful for an opening in October. A lot of work has gone on in the front of the theatre already, and major construction is slated to begin in four weeks or less.

Smith said bricks are still available for purchase to help with the cost of the construction and naming rights are also up for sale for the concession stand and the stage.  inscribed bricks go for $50 or $100. Click here to visit the group’s GoFundMe page.

This year’s event was Polynesian-themed and was catered by El Charro with assistance from Kainoa’s Hawaiian Grill. To go with the theme, Eastern Arizona College’s Polynesian Club members put on a show for those in attendance which included a traditional “Haka”, which is an ancient Maori war dance from New Zealand that spread throughout Polynesian culture.

Along with the business winners, Smith also announced the artists who were chosen to paint the mural on the Farmer’s Insurance building and the business who won the 48 Hour Makeover contest. Tucson artist Amy B. Novelli and former Safford now current Tucson resident Michaela Dannenbrink were chosen to paint the mural and El Coronado was chosen for the 48 Hour Makeover. Read more about them here.

As for the Best of Safford Awards, it was business as usual for Casa Mañana, which took home the award for Best Dining Experience for the second year in a row. Co-owner Adam Hoopes has so many of these awards throughout the years that he could retile the establishment’s restroom.

The Best Customer Service award went to the Cottage Bakery, which won last year for Best Excellence and was a finalist in that category again this year. Owner Ruth Dannenbrink said the hard work of her daughters is what makes the business customer-friendly. Dannenbrink has run the Cottage Bed and Breakfast for eight years and started the bakery six years ago.

“I think my girls do a great job and I’m glad people appreciate them,” Dannenbrink said.

“We first moved into that building in 1993 into one little space where you could see light through the roof and you could see the cruddy floor,” Tolman said. “We took one little place and made two; added a building on the back and then made three and then made four. And now we’ve taken over the business that was on the corner . . . I never would have dreamed it was going to happen in ’92 when we started.”

Co-owner Laura Tolman told the Gila Herald that the business has maxed its growth potential at that location.

“I think we’re done expanding unless we go up,” Laura said.

A first occurred this year when a tie was announced for the Best Excellence award between Ginaveve’s Marketplace and Palmer & Johnson Family Dental.

In the Best Newcomer category, the new Circle K on the east side took home honors over contenders The Main Street Bean, Rustic Lace Wax Bar and Salon, Posh Puppy Grooming, and the Sativa Soap Shop.

Smith said the event had its biggest turnout of votes this year with 947 voters. He added that he normally advertised the voting in the Eastern Arizona Courier but decided not to do that this year and only promoted the voting through online venues, resulting in a much higher turnout.

Smith said in addition to the number of votes, this year also some a record in the number of businesses that nominated. He added that it is hard to see those who don’t get the award and hopes those that do know how special it is.

“I hope it means something to them,” Smith said. “I hope it encourages them and they appreciate it.”

Click here to view a photo album of the event.