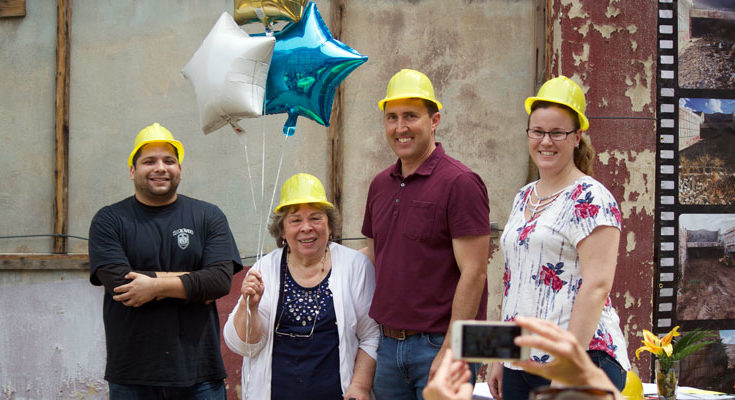 The mural will be pained on the Farmer’s Insurance Building in Downtown Safford at 610 W. Main St. The building is cinder block construction, approximately 42’ long by 14.6’ high.

Tucson artist Amy B. Novelli was chosen to be the artist, along with former Safford resident Michaela Dannenbrink, who is also currently living in Tucson.

In her letter of interest, Novelli advised that she has won five large-scale outdoor mural commissions since 2015, in Arizona, Ohio, Pennsylvania, and Washington, and has supervised four public art projects in Tucson.

With 30 years of experience, Novelli said she enjoys painting murals because not only is her art seen by thousands of people but she deemed murals as a performance event an agent of change.

“Ownership is communal,” Novelli said about murals. “The mural is a place maker, (it) becomes a meeting place; inspires smiles on local commuters’ faces where drudgery once persisted . . . Neighbors become protective and gain pride in their community. Businesses hurry to move in and share in the new social interaction. New improvement projects are inspired to begin.”

Dannenbrink is currently living in Tucson and paints sets for the Arizona Theatre Company. Her mother, Ruth Dannenbrink, expressed her pleasure of Michaela being able to work on the project.

“It’s nice of her to be able to come back and do something nice for this town,” Ruth said.

Smith said there were five applicants that were narrowed down to three finalists who were interviews for the mural award and that he hopes all of the applicants are able to work on Downtown murals in the future.

“They have done work all over (and) are really accomplished artists,” he said. “We were just really impressed.”

El Coronado was chosen as the winner of the 48 Hour Makeover event. The restaurant will receive $5,000 in cash as well as $500 in merchandise from Safford Builders and will also receive some combination of renovated facade, including potential elements such as signage, awnings, windows, masonry, or cornice repair; upgraded interior space, including merchandising, improved layout and/or space design; upgraded marketing materials and plan, including social media, e-marketing and print marketing promotions; regional media coverage, including a press release and promotional video; and additional one-on-one technical assistance from the 48 Hour Makeover Committee.

According to its Facebook page, El Coronado Restaurant has been a Safford staple since 1981. Last year, under different ownership, it was a location for the independent feature film “To Hell and Gone.”

But now Mary is back and El Coronado and the 48 Hour Makeover Committee will meet April 1 – 5 to address all aspects of the business and plan the makeover event. The event will then commence April 24 – 25.