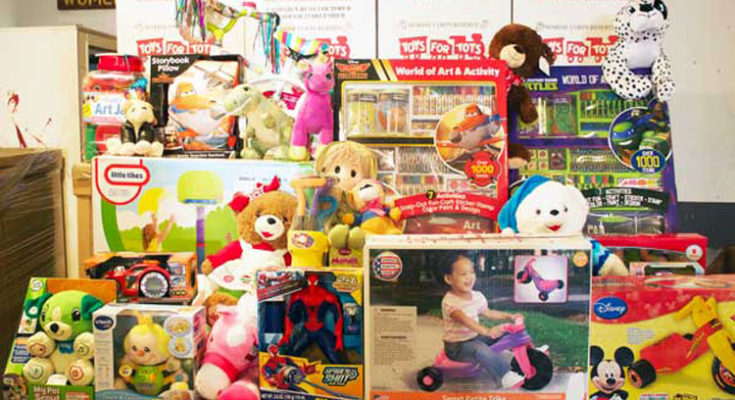 GRAHAM COUNTY – The ghouls and goblins are gone for another year and that means it must be time to sign up for Toys for Tots!

After 13 years at the helm, Greg St. Hilaire has taken a step back and retired Marine James Tippy is the official coordinator for the Toys for Tots charity in Graham County this year. However, since Tippy is out of town for work frequently, St. Hilaire is still the contact point this year in his role as assistant coordinator.

Those in Graham County who wish to sign up children to receive toys can do so at the Victory Fellowship Church at 555 Entertainment Ave. throughout the month of November. Sign up at the church during working hours of 1 – 7 p.m. any day of the week.

The required documentation to sign up a child include a photo identification for the parent or guardian, DES determination letter, and proof of residency, or proof of guardianship, birth certificates of the children, and social security cards for the children. The age cutoff to receive presents is 16. For more information call (928) 235-0373 or email Toys4totsgraham@gmail.com.

The Toys for Tots program gave away about 18,000 gifts to roughly 6,000 children in Graham County last year, with each child receiving at least three gifts. The gifts are tailored to each child from a questionnaire parents or guardians fill out when they sign up a child. St. Hilaire said he believes he receives divine guidance in heading the program, as he is constantly hearing from parents that the toys he gives their children are just what they were hoping for.

St. Hilaire became the local coordinator in 2007 and has improved the program each year, even through tough economic times. In 2010, he was recognized by the Toys for Tots Foundation as the Region IV Civilian Coordinator of the Year.

With assistance from the local Pepsi plant and the use of a storage facility in Solomon, St. Hilaire’s facility has become a depot where he can receive large shipments of toys from the national organization and parcel out the pallets of toys to other coordinators throughout Arizona and New Mexico.

The Toys for Tots program is a top-rated charity with roughly 97 percent of monetary donations being used to provide toys, books, and other gifts to children with only about 3 percent used for administrative and fundraising costs. This year, there are 811 campaigns consisting of 147 Marine Forces Reserve units and 664 Local Community Organizations.

Locally, St. Hilaire said 100 percent of all donations are used to provide toys to the children as he even pays for his own gas to travel around the different counties gathering and distributing toy and money collection boxes and jars. While St. Hilaire shops for toys year-round to get the best bang for the buck, numerous businesses help out by allowing the roughly 100 toy drop-off boxes and 100 donation jars to be placed in their shops throughout Graham and Greenlee counties. So, drop a new, unwrapped tow in a donation box or drop a buck in a donation jar and know with confidence that it is going where intended.