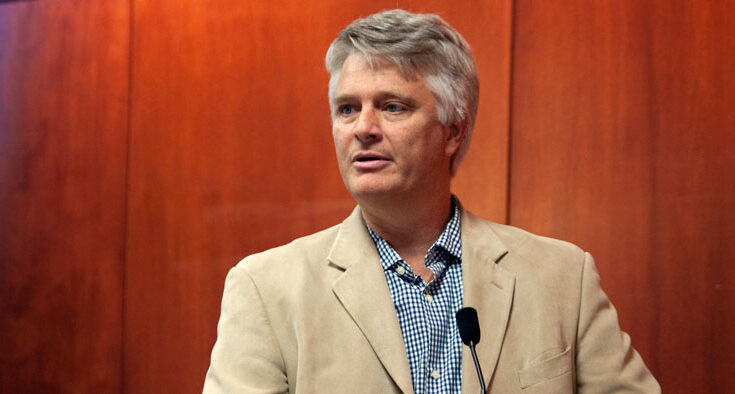 Jon Johnson Photo/Gila Herald: NatureSweet President and CEO Rodolfo Spielmann speaks to the Graham County BOS and reports about the possible loss of the Innovation Center in Bonita due to lack of certainty over its sale of greenhouses to Bayacan to grow cannabis.

SAFFORD – The likelihood that NatureSweet’s greenhouse Site 1 will be turned into a world-class research and development Innovation Center gets less and less every day due to the uncertainty of the viability of its pending sale of two greenhouses to Bayacan Inc. for the purpose of establishing a commercial cannabis cultivation site.

That was basically the message delivered by NatureSweet President and CEO Rodolfo Spielmann to the Graham County Board of Supervisors during the “Call to the Public” portion of the supervisors’ Monday morning meeting.

Spielmann said while he wasn’t asking for any investment from the county to move forward with the research facility, other counties closer to NatureSweet’s home base in Texas have, and that the company cannot wait until the November 2022 election to see if its greenhouse sale to Bayacan will go forward.

“We are on a tight deadline to have hour research and development facility operating, and we just can’t keep waiting on the result of a never-ending process,” Spielmann said in a press release after the meeting. “We want to stay in this community and continue to support education and economic development in the region, but every day that goes by with our operations inactive, we are hurting the business and our mission to transform the lives of agricultural workers in North America. We are making every possible effort to continue investing, and we have maintained what I mentioned since the very beginning: I’m committed to reinvesting the proceedings of our sale to Bayacan toward building a world-class Innovation Center. I also want to be sure that it’s clear for all: Our business can’t wait for two years on a decision to invest.”

The release continues to state, “If NatureSweet is unable to generate the funds to build its Innovation Center in Bonita due to efforts that are blocking the sale of some of its greenhouses, the company will have no other option but to consider and accept the incentives other states offer to bring this project to their regions. NatureSweet is requesting clarity, support, and expedited decision-making for purposes of continuing its business operations and investing in Graham County. Without this necessary clarity, support, and expedited decision-making, the company may be forced to explore other alternatives.”

Vance Bryce, Graham County Chamber of Commerce Director, Keith Alexander, EAC special assistant to the president for community and government relations, and Reed Richins, owner of Double R Entertainment, all spoke during the Call to the Public portion in support of NatureSweet and Bayacan’s planned investment and grow operation. Alexander spoke about the great opportunities the college would have with such an agricultural research center so close, and Bryce and Richins spoke about the economic value.

NatureSweet general counsel Skip Hulett also spoke at the meeting during the “Call to the Public” and said businesses need certainty.

“For so long, we haven’t had the certainty,” Hulett said. “So, that’s really what we’re asking for is certainty. And I know that some of this is out of your control and it’s difficult, but what I would hope is that we could all put our heads together and figure out – even if we’re creative – figure out a way to bring certainty so that we can bring this research and development Innovation Center here because we really do want to stay in this community.”

That all being said, the BOS isn’t really sure what more it can do to support the greenhouses’ updates.

The Graham County Board of Supervisors previously voted 2-1 at its June 22 meeting to approve a resolution to rezone two greenhouses at NatureSweet’s facility in Bonita to allow commercial cannabis cultivation. BOS Chairman Danny Smith, whose district includes the Bonita facility, cast the lone dissenting vote.

Bayacan, LLC, filed the rezoning application to change it from General Land Use Certification to Unlimited Manufacturing to allow it to grow medical-grade cannabis in accordance with Graham County.

The ruling allowed NatureSweet to move forward with the sale of its greenhouse Site 6 to Bayacan Inc., which plans to utilize the site to grow medical-grade cannabis. The operation would only include the cultivation of the plant and harvesting of its fruit, with no processing or sales taking place at the site. A second greenhouse, Site 5, was also included in the rezoning, and Bayacan may purchase that at a later date to expand its operations.

For its part, the diversification of the greenhouses would allow NatureSweet to create a world-class research and development facility at its greenhouse Site 1 with a possible later expansion into Site 2. NatureSweet’s greenhouses at Site 3 and Site 4 will still be utilized for tomato cultivation, along with possible other agriculture products.

However, A group called “Respect The Will Of The People: Graham County Voters & The Arizona Public Integrity Alliance Encourages A No Vote On Massive Marijuana Expansion In Our Area,” sought signatures for a referendum on a decision by the Graham County Board of Supervisors (BOS) to rezone greenhouses at the NatureSweet site in Bonita to allow for the cultivation of cannabis. The group beat an Aug. 5 deadline and turned in 2,288 signatures, according to Graham County Elections Director, Hannah Duderstadt.

Bayacan Inc. attorney Heather Dukes advised regarding a complaint to the petition signatures being filed to throw them out so the referendum doesn’t make it to the ballot.

“There’s a lot of issues with the signatures, a ton,” Dukes previously said.

A random sample of 113 signatures turned in showed 23 to not be qualified electors for a roughly 20 percent failure rate. However, since the group turned in more than twice the required 1,064 signatures, Graham County Recorder Wendy John certified the signatures Aug. 23 and Duderstadt acknowledged a final receipt of the valid signatures, allowing the referendum to be placed on the November 2022 General Election Ballot. More than 13,650 people voted in Graham County in the November 2020 General Election.

There is also a push to add a $1,000 per pound tax on all cannabis grown in Graham County, which would essentially cause all grow operations in the county to cease, including Graham Mountain Flowers’ operation in Eden, where they are constructing 100,000 square feet of greenhouse space to grow cannabis.

The referendum is already slated to be on the November ballot – unless lawsuits fighting the referendum are victorious – and the tax initiative has until July 8, 2022, to turn in 1,596 signatures to be placed on the Nov. 8, 2022, election.

BOS Chairman Danny Smith told the Gila Herald that he isn’t sure what the perceived impediment is from the BOS’ standpoint and that it is doing what it can. However, since Bayacan has a lawsuit pending over the referendum signatures, the interaction between the BOS is limited and added that the BOS already approved Bayacan’s zoning change request.

“It’s worked up like we’re some sort of impediment,” Smith said. “They can go get a variance. They can build their resource center. And as much as that’s tied to their uncertainty with Bayacan, what do you want me to do? We approved it, so knock yourself out at this point.”

Spielmann told the Gila Herald that since Bayacan has not moved forward with the purchase of the two greenhouse sites due to its uncertainty of being able to grow cannabis there he has to examine other options for the Innovation Center while still being committed to building it at its property in Bonita.

“We’re super committed,” Spielmann said.”We want to stay here and keep the development and the investment in the Innovation Center, we just want help to get certainty.”