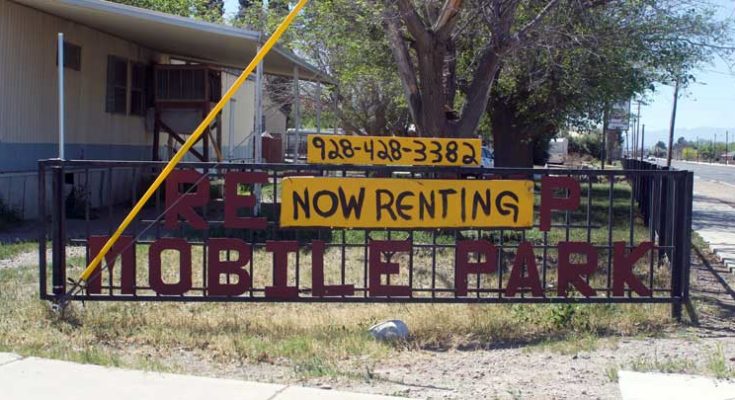 THATCHER – Renters at the Red Lamp Mobile Park will be out by the end of the month, while owners will be allowed to stay until the end of November.

That was the update given to the Thatcher Town Council at its Monday night meeting by Town Engineer/Interim Town Manager Heath Brown.

The town previously agreed to purchase the Red Lamp for $1.2 million and will do so at the beginning of the next fiscal year in July. Click here to see our previous article on the purchase.

Thatcher has already taken ownership of the 4.5-acre property, however, and began giving notice to renters – who already were month-to-month – of the impending eviction date. The town plans on using the space for commercial development and perhaps the building of single-family homes.

Brown said that the town will keep the park’s manager and maintenance person on for an additional month through July at $13 per hour, but then the jobs will be eliminated. The positions were being kept to achieve an orderly transition and exit from those who were renting trailers there.

“After that, with just six or so (owner) residences, I think we can handle that and not have to pay them for another four months,” Brown said.

Thatcher had intended on auctioning off the trailers left at the park beginning with $1, but due to Graham County rules, any pre-1976 trailer leaving the park would have to be up to code. With most of the trailers nowhere near that stipulation, it would cost up to $20,000 per trailer for an owner to legally move it from the park, according to Brown.

Instead, the town is looking to local metal scrappers to break down the trailers and haul the recyclable materials and debris away. Brown said the town currently has an offer from one such business to do the job for about $400 per trailer. There are roughly 30 trailers in the park, and one of the few owners advised she was not going to take her trailer when she leaves the park either due to the expense.

“I know we really wanted to give them away, but it’s just one problem after another we’re running into,” Brown said. “They’re not in good shape.”

The council also received an update from Fire Chief Mike Payne and Police Chief Shaffen Woods regarding the May 31 fire at the Red Lamp that burned down three mobile homes, displacing two families. Read the Gila Herald’s report on the fire here.

According to Woods, some juveniles were seen smoking cigarettes in the area just prior to the fire starting. He believes the juveniles are the likely culprit for the cause of the fire.

“It’s highly likely, but we don’t know for sure,” Woods said.

Payne agreed but said due to the amount of devastation, there was no way to prove it.

“It destroyed it so much that we really can’t tell how it started,” Payne said. “All we have to go off is eyewitness accounts of what was going on in the area. With that, I guess we’re still kind of investigating, but it was kind of undetermined how it started. (That’s) probably how it will go down.”