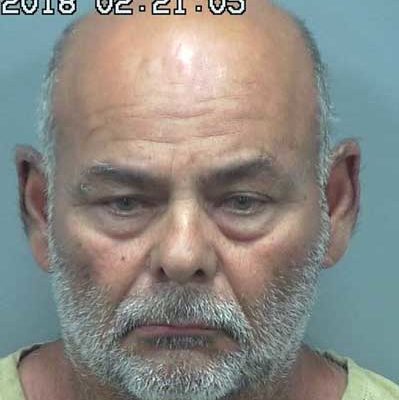 Contributed Photo/Courtesy GCSO: Eddie Ray Sanchez ran from the police due to his warrants but was soon caught and was found to have meth in his pocket.

SAFFORD – A more than thrice-convicted felon wanted for failing to fulfill probation requirements regarding convictions for DUI and theft ran from officers Wednesday, June 13, but he did not get far.

Eddie Ray Sanchez, 61, was arrested and booked into the Graham County Adult Detention Facility on two warrants after acting suspicious outside of an apartment complex. Sanchez was also found to be in possession of methamphetamine and drug paraphernalia.

According to a Safford Police report, an officer was dispatched to an area outside of an apartment complex on 8th Street at about 3:47 p.m. regarding a suspicious vehicle.

Upon arrival, the officer located Sanchez reclined in the driver’s seat of a Chevy Blazer with the vehicle’s hood open.

Sanchez claimed to be working on his SUV, but the officer believed he appeared to be nervous and was acting oddly. A large knife was observed wedged between the driver’s seat and center console, giving the officer more reason to pursue carefully.

After repeatedly refusing the officer’s orders, Sanchez eventually exited the SUV and agreed to be searched. However, each time the officer attempted to search him, Sanchez pulled away. As the officer called for backup, Sanchez allegedly put his hands in his pockets and yelled an expletive before running from the scene across the apartments’ parking lot toward 8th Street.

Sanchez managed to make it across 1st Avenue while westbound on 8th Street but was then nabbed by a DPS trooper who answered the call to assist. The trooper showed the Safford officer an empty plastic baggie with apparent drug residue that he found on the ground next to Sanchez.

At that time, County Dispatch confirmed a warrant for Sanchez and he was transported to the jail. Prior to being booked, Sanchez was asked if he had anything illegal on him and he advised he didn’t and asked his vehicle not be towed because he would “bond out within an hour,” according to the report.

At the jail, however, a booking officer located a quantity of loose methamphetamine in Sanchez’s pocket. The meth was taken for testing purposes and the officer’s report was forwarded to the Graham County Attorney for review and charging.

Sanchez was indeed released the following day but was booked back into the jail Monday on charges of misconduct involving weapons and driving on a suspended license.