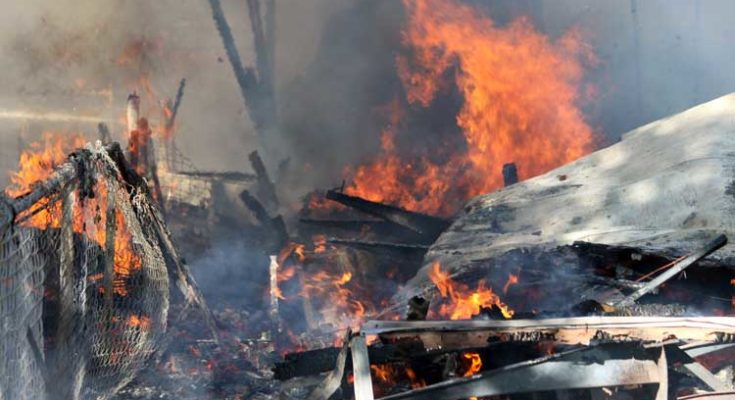 The park is located at 3341 W. Main St. with the entrance just past the intersection with Third Avenue and Main Street (U.S. Highway 70).

Firefighters were dispatched to the park at about 5 p.m. regarding the blaze.

Three trailers burnt in the fire, which also damaged utility poles next to the trailers.

Neighbors told the Gila Herald that two of the mobile homes were occupied, including the middle one where the fire began. The mobile home to the north was allegedly owned by the occupant and the one to the south was not being used. All of the occupants reportedly got out of the homes without injury. Park resident Raquel Phillips told the Gila Herald that the residents’ spirits have been low due to the impending sale of the park and that the fire brought them together in solidarity.

“As we watched in horror the trailers burn, our thoughts were if neighbors and pets were safe and ok,” Phillips said. ” All we could do is pray as we watched the firefighters bravely battle the flames and keep them from spreading to the many trailers close by.”

Phillips also put out a call for assistance for the two families that lost their homes and belongings.

“Two families lost everything they owned,” she said. “If there is anyone wanting to help these families, please contact the parks office (428-3382) for more information on what the families are in need of, thanks.”

The town of Thatcher previously agreed to purchase the 4.5-acre property for $1.2 million. The sale is expected to close July 2, with all of the monthly renters given 30 days from that point to leave the area. Rivera previously told the Gila Herald that the few residents who actually owned their mobile homes would be given more time before they had to vacate. He said the number of actual owners in the park could be as low as four.