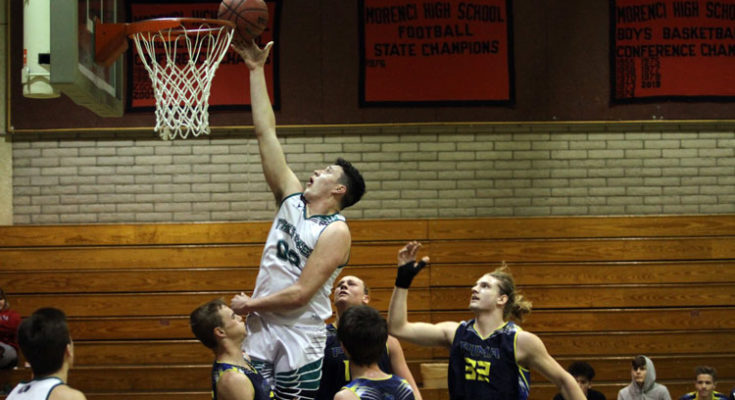 File Photo By Stan Bonifacio: Thatcher’s Cole Motes, shown here in an earlier game this year against Pima, and the rest of the Eagles had no problem dispatching Chandler Prep in the opening game of the 2A State Basketball Tournament.

Will face Morenci in quarterfinals

PRESCOTT VALLEY – The game was never in question as Thatcher opened up double-digit lead before Chandler Prep even scored and pushed it to a 30-point advantage by halftime.

The No. 4 Thatcher Eagles used a stifling defense and a streaky, speedy offense to knock off the No. 13 Chandler Prep Titans 55-31 in the opening round of the 2A State Basketball Tournament. And it wasn’t even that close.

Thatcher will now face No. 5 Morenci, which beat No. 12 Phoenix Country Day 69-38. The game was scheduled to start at the same time as the Thatcher game but was delayed by a triple overtime game between No. 9 Rancho Solano Prep and No. 8 Trivium Prep. Rancho Solano eked out the victory, 80-77, and will now likely have the honor of facing No. 1 Scottsdale Christian.

The Thatcher/Morenci matchup will be at Yavapai Community College on Saturday, starting at 4:30 p.m.

Thatcher was off and running from the very start Friday, as Cole Motes won the tip and Trace Goodman opened up the scoring with a quick bucket. Conversely, Chandler Prep couldn’t find the bucket, and only hit one solitary field goal – a 3-pointer – in the first period. Part of the problem for Chandler Prep was they had trouble getting the ball off over Motes and White, who had multiple blocks.

In a post-game interview, Thatcher head coach Chris Riehemann said the Eagles’ loss last week to Pima in the 2A East Regional Tournament opened their eyes and pushed them to do better on the defensive rebound side. He also added that the early scoring helped build their confidence.

“What really helps us is we made some shots early,” Riehemann said. “When you make shots you have a little bit more bounce to your step, you’re a little bit better defensively and tend to get after the ball.”

Matt Palmer was on fire from deep in the first period. Palmer hit two back-to-back 3-pointers in the beginning of the period to help push the Eagles to a quick 10-0 lead and ended the period with another 3-pointer to give Thatcher a big 17-4 lead at the end of the first period.

Palmer continued his hot streak in the second period with a field goal off the bat. By the time Palmer hit his fourth 3-pointer in the first half, the rout was on and Thatcher led 26-4 with about 4 minutes left in the period.

If Chandler Prep thought the first period was tough to score, the second was even worse. All of the Titans’ points in the period came off free throws as they failed to hit on any field goals. The Titans weren’t getting any rebounds either, and went 1-11 from the field in the first half.

Thatcher didn’t have that problem as Palmer scored yet again, and Rulon White had a rebound dunk to rile up the crowd. White also previously had a successful and-1 play as he hit a bucket and following free throw. Goodman then nailed a 3-pointer to give the Eagles a 30-point lead at the half, 36-6.

In the third period, it was Kason Crosby’s turn to showcase his skills as he hit a 3-pointer and followed it up with a block and drive to the bucket. Thatcher eventually pushed the lead to 53-16 at the end of the third period, which invoked the running clock mercy rule for the fourth period, and Thatcher basically emptied its bench to play out the rest of the game.

Palmer led the scoring with 16 points – all in the first half – while Motes finished with eight points and 13 rebounds, White had 11 points and four rebounds, Crosby had nine points, and Goodman had five points and two rebounds.

In other playoff action:

The No. 7 Thatcher Eagles girls basketball team had no trouble in dispatching the No. 10 Phoenix Christian Cougars 65-51 at Bradshaw Mountain High School on Friday in the opening round of the 2A Girls State Basketball Tournament.

Thatcher will now play the winner of the No. 2 Chandler Prep versus No. 15 Globe game that will be held Friday at Yavapai Community College, starting at 4:30 p.m. The quarterfinal matchup will also be played at YCC and is scheduled to start at 9 a.m., Saturday.

The No. 4 Fort Thomas girls team beat No. 13 San Pasqual 54-51. The Apaches will battle against No. 5 Mogollon at the Findlay Toyota Center on Saturday, starting at 1:30 p.m.