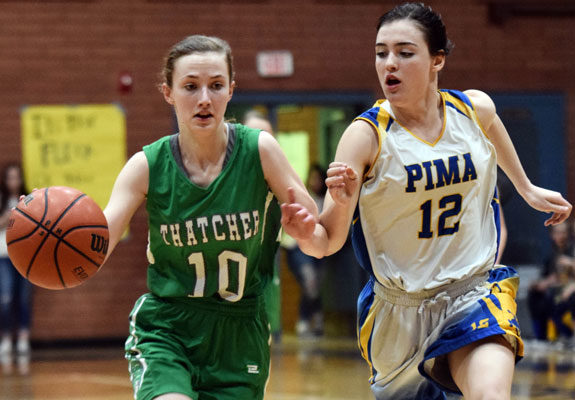 Raymundo Frasquillo File Photo/Gila Herald: Brooklyn Angle, shown here in an earlier game against Pima, led the Thatcher Eagles to a 65-51 win over the Phoenix Christian Cougars on Friday in the opening round of the 2A Girls State Basketball Tournament.

PRESCOTT VALLEY – The No. 7 Thatcher Eagles girls basketball team had no trouble in dispatching the No. 10 Phoenix Christian Cougars 65-51 at Bradshaw Mountain High School on Friday in the opening round of the 2A Girls State Basketball Tournament.

Thatcher will now play the winner of the No. 2 Chandler Prep versus No. 15 Globe game that will be held Friday at Yavapai Community College, starting at 4:30 p.m. The quarterfinal matchup will also be played at YCC and is scheduled to start at 9 a.m., Saturday.

After a slow start, Thatcher opened a 10-2 lead with about three minutes left in the opening salvo. Phoenix Christian came back with a vengeance and went on a run to tie the game at 15 apiece at the start of the second period.

However, behind the sharp shooting of Brooklyn Angle hitting deep 3’s, Thatcher rebuilt its lead during the period and quickly went up by double digits. Angle went for 13 of her team-high 19 points in the first half to help push Thatcher to a 34-22 halftime lead.

Phoenix Christian only had one senior on the team, Mawe Rivero, who finished with a game-high 20 points. Rivero’s sister, freshman Galilea Rivero, had 11 points, while sophomore Ainslee Ebert finished with 12 points and nine rebounds.

The Eagles continued to pummel the Cougars in the third period, running and gunning to eventually build a 24-point lead. A late 3-pointer cut slightly into the lead, but the Eagles were still up big at the end of the third period, 52-31.

Angle led the way with 19 points, followed by sophomore Karlee Lords with 15 points and six rebounds. Laci Whitmer had four points and a game-high 10 rebounds.

The game was all but decided at the start of the fourth period, and Thatcher cruised on to win, 65-51. The Eagles will play their quarterfinal matchup at Yavapai Community College on Saturday, starting at 9 a.m.