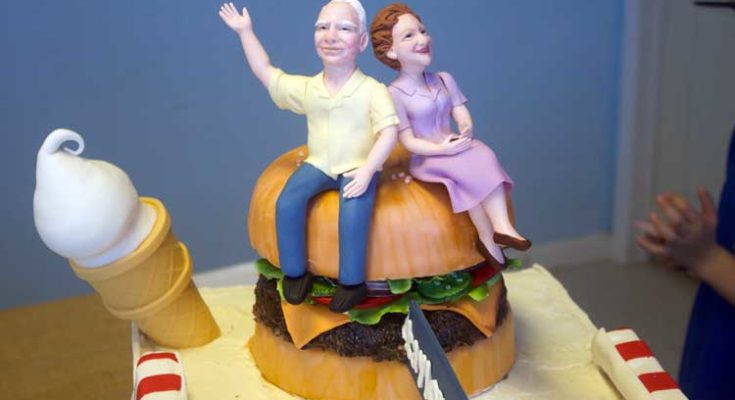 Jon Johnson Photo/Gila Herald: This cake topper was literally the icing on top of the Taylor Freeze’s 50th-anniversary celebration Saturday.

PIMA – Dignitaries, employees past and present, friends, family, and those looking to get a sweet deal on ice cream joined owners Joe and Sheryl Goodman in celebrating the Taylor Freeze’s 50th anniversary as a family-run business Saturday.

“This has been an institution to this valley,” owner Sheryl Goodman said. “And we are so excited that everybody is here to celebrate with us . . .”

The business celebrated in style Saturday with a live radio remote, 50-cent ice cream cones, a classic car show, and mascots in burger and ice cream suits bopping around. There were also games for children, face painting, a trivia hunt, and a mural with more than 100 hands painted on the side of the adjacent building. The hands were sold for $20 each to those who wished to inscribe their names in them, with the money being donated to the Eastern Arizona Museum and Historical Society of Graham County.

Graham County Chamber of Commerce Director Patrick O’Donnell and Board Chairman Tim Linden were on hand to assist with a ribbon cutting celebrating the achievement.

To top it all off was an outstanding cake created by Stacie Hinton McBride of The Cake Hive. The cake recreated the business with owners Jerry and Leona Taylor sitting on top of the restaurant on a giant hamburger as current owners Joe and Sheryl Goodman get an order in their classic truck from longtime employee Joyce Johnson. Visit The Cake Hive’s Facebook page here to see more of McBride’s creations.

The business started as a Tastee Freeze franchise in 1963 by Bob Gumphrey, who sold it five years later in 1968 to Jerry and Leona Taylor. The restaurant became famous for “grandma” Leona’s tacos and other Mexican dishes she created.

Jerry and Leona ran the Tastee Freeze for 30 years until they sold it to their daughter, Deanna Mangum and her husband Gary Mangum, in 1998. Shortly thereafter, issues with the franchise had the Mangums drop the Tastee Freeze name in favor of Taylor Freeze.

“This is an awesome turnout,” Joe Goodman said. “Talk about a connection to (the) community, this feels really good. I appreciate everybody coming out.”

Through the various incantations and owners, a couple of things have stayed the same – none more wondrous than employee Joyce Johnson, who has been at the restaurant since 1967.

“I’m not there as much as I used to be, but I still work some,” Johnson said. “I enjoy it, and they’ve always been so nice to me. They treat me like one of their kids.”

Jerry and Leona’s grandchildren, Clint Woods and Missy Woods, recalled picking up trash outside the building as youths when they were too young to work in the restaurant. Missy said Jerry would sit at his residence across and down the street a bit and eye the restaurant with binoculars.

“He would call up and say, ‘Why are you sitting on my freezer, or that car has been sitting in the drive-through way too long,’” Missy said.