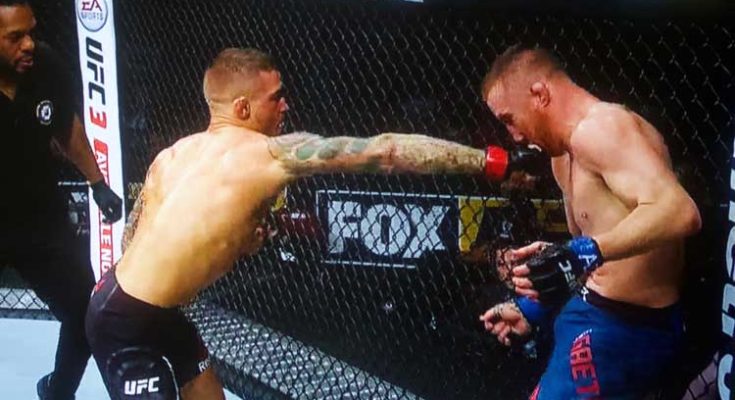 Dustin Poirier connects with a shot to Justin Gaethje’s jaw just before the fight was called.

GLENDALE – If you are from Safford, be careful when you go to Glendale, you just might get robbed.

There’s a reason Safford native Justin “The Highlight” Gaethje has had two main card fights in his three appearances in the UFC, his fights are legendary.

No. 6 Gaethje (18-2 MMA, 1-2 UFC) had No. 5 Dustin “The Diamond” Poirier (23-6 MMA, 15-4 UFC) on the ropes ready to fall in the third round at UFC on Fox 29 at the Gila River Arena in Glendale when referee Herb Dean called Gaethje for an eye poke and gave Poirier time to recover. Poirier, who was walking like a 75-year-old retired NFL running back due to thundering leg kicks from Gaethje, also had time to recover in the second round due to an accidental eye poke as well. That round ended with Gaethje performing a wild flip kick that left the announcers dumbfounded.

When the fight resumed, Poirier seemingly gave an intentional eye poke to Gaethje just before the round ended. However, referee Dean did not warn Poirier about the eye poke as he had Gaethje, and Gaethje wasn’t given any time to recover.

At the start of the fourth round with Gaethje obviously still having trouble seeing due to the eye poke Poirier attacked and stunned Gaethje with a slew of headshots. As Gaethje failed to escape and headed to the ground, he began to shoot in wrestling to continue to fight but Dean called the fight just 33 seconds into the fourth round.

Previously, the two men had battled brilliantly against each other, with Gaethje attacking Poirier’s leg while Poirier countered with vicious shots to Gaethje’s head.

Gaethje was the clear crowd favorite as the arena erupted with cheers as he was introduced and booed Poirier, who came off every bit as the villain.

After two close rounds of the men pummeling each other, it appeared that Gaethje had it wrapped up in the third as Poirier was stunned, hurt, and wobbly on a sore right knee that will not be the same for some time. But Gaethje was calculating and didn’t rush into finishing Poirier off, and after Poirier got a break for the supposed eye poke and then injured Gaethje with a poke of his own, the tide turned in a heartbeat.

After the match, Poirier chastised the crowd for booing him and demanded a championship match with Khabib Nurmagomedov.

Even though the fight ended up as a loss, Gaethje brought the pride of Safford with him into the ring, and, as the No. 6-ranked fighter in his class in the world, remains as one of the most storied athletes to have emerged from the area.

The Safford natives went 0-2 in Glendale on this trip as Matthew Lopez also was downed in a TKO decision in the second round of his fight.