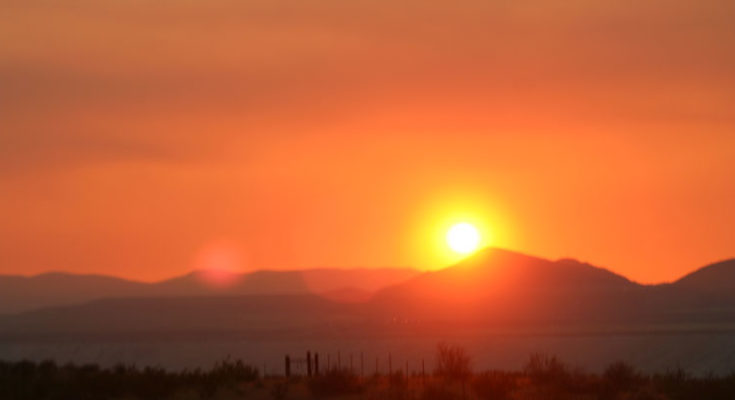 Walt Mares Photo/Gila Herald: Unusual colors taint the sunset as it settles over Morenci and Clifton around 7 p.m., June 19. That is the result of smoke setting into the area from the Bringham Fire 22 miles north of Morenci in the Apache National Forest. The sky is bright blue during the day but smoke blows in and makes for interestingly-colored sunsets. The fire began June 6 and evening skies are becoming much more smokey.

CLIFTON – Saturday, June 20, was a longer day in which to have more fun in the sun or work late into the evening on some outdoor project.

It was the Summer Solstice, the longest day of the year.

For firefighters battling the Bringham Fire, it means having to fight all the harder to bring the blaze under control. Because of the solstice, there is now more solar radiation which affects the winds blowing in the area.

The skies over the Clifton-Morenci area have been a clear, bright blue throughout the daytime. However, in the evening the sky around the communities has become quite hazy and the odor of smoke becomes stronger than at any time during the day.

Early on in the fire, the smoke was barely detectable. In recent days people are heard to comment and complain about the smoke.

Who knows how the solstice will affect this evening’s winds.

Some people are wearing face masks as protection against the potentially deadly coronavirus global pandemic. They do so mostly when in public places such as stores. For those with already compromised respiratory systems, in the event of thicker smoke blowing into Clifton-Morenci, they may want to consider wearing masks when they are outdoors.

The lightning-caused fire began June 6. It has already consumed more than 17,000 acres of the Apache-Sitgreaves National Forests. The fire is 22 miles north of Morenci.

A news release from the fire’s incident management team explained that the summer solstice provides more incoming solar radiation than any other time of year, bringing increased energy that heats the air above the Earth’s surface. For the Bringham Fire, the event is likely to enhance terrain driven winds that are strongly influenced by solar radiation.

“This impact will be amplified on southwest-facing slopes that could experience stronger upslope winds due to the extra energy,” according to Incident Meteorologist Royce Fontenot.  He said, “On the Bringham Fire, firefighters will experience approximately 14 hours and 22 seconds of daylight today.” That will undoubtedly make for a much longer, perhaps deadlier day for firefighters.

At present, there are 344 crew members overall battling the blaze. There are hotshot crews and equipment that includes two helicopters and at least seven fire engines.

U.S. Highway 191, known as the Coronado Trail, remains closed in both directions between Milepost 189 past Juan Miller Road and Milepost 225 at Blue Vista. The closure has been extended through June 27 and may be further extended as firefighters continue to secure the road corridor.

Fire personnel is using Highway 191 to transport crews, supplies, and equipment to and from the incident. Members of the public are advised to drive with caution and leave roadways clear for emergency vehicles and equipment to pass. More information can be found at https://azdot.gov/adot-news/us-191-closed-eastern-arizona-mountains-due-bringham-fire.

The Bringham Fire remains active in Strayhorse Canyon, Lengthy Canyon, and the east side of Red Mountain, moving primarily to the east. According to a news release, today several members of the Lolo Hotshots will hike into Strayhorse Canyon to scout and assess different options for possible direct firefighting tactics.

Crews are seeking opportunities to secure the fire in Strayhorse Canyon and reduce the potential for any fire to establish in the area. Structure protection is ongoing around isolated cabins and in the Blue River area, and crews are continuing to monitor Highway 191 to ensure the fire does not move west.