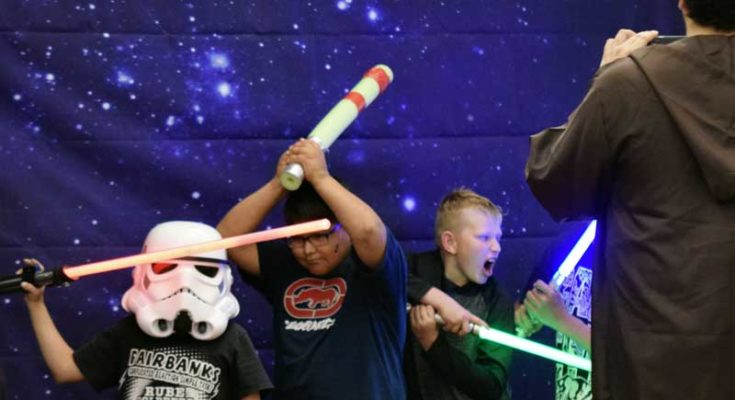 MORENCI – Ewoks in the Star Wars series are generally quite short. Not so with the Ewok who was using his “lightsaber” fending off as many as six attackers at one time. They, too, had lightsabers. The Ewok fended all of them off in the battle taking place in the courtyard in front of the Morenci Library on May 3.

The scene was part of the Star Wars celebration held at the Morenci Club. It was sponsored and organized by the Morenci Community Library. The event was a total success. It drew a large number of children along with some parents who appeared to be having a fun time as they observed their youngsters’ interaction action with Star Wars characters.

As for the battle raging in the library’s courtyard, that particular Ewok stood about 6′-4″. His costume was something of a hybrid. It was brown and robe-like. It flowed as the Ewok moved swiftly in fending off his “attackers.” The costume included a hood over his head and a mask that looked like an oxygen breathing device. Overall the Ewok looked a bit scary.

The tall Ewok was played by Caesar Russell of the Morenci Fitness Center. It, the library and the Morenci Club are all part of the Morenci Community Center. The lightsabers were actually long tubes of soft styrofoam. Any blows struck by the sabers were completely harmless.

The Morenci Club held a quite dazzling display of Star Wars characters and related items that youngsters could take home. The costumed characters were Morenci Libray staff members and some, such as Russell, were Fitness Center staff.

Librarian Jody Stejskal-Johnson and staff members were lauded for the outstanding effort they put in setting up the event. Judging by the number of people attending the celebration and the effort of staffers in creating costumes, one had to give a big thumbs up to the overall effort. The fact that a good time was had by all was evident in the smiles and laughter of children.

Perhaps the most memorable and scariest creatures at the event was Darth Vader’s mother. Say what? Those who have not followed the Star Wars Series over the years may have been taken aback at the idea of Vader ever having had a mother.

Actually, the table at which Vader’s mother was stationed was probably the most popular of all, despite how hideous she looked. Her face was blood red with streaks of black and she wore a jet black robe.

In contrast, across the walkway between stations stood a figure of peace and serenity, Princess Leia, clad in a greenish robe.

Other Star Wars characters represented in costume included the master of evil Darth Vader. There was a very tall and imposing Storm Trooper dressed in his shell of white.

Other characters, not in costume, were represented by large cardboard figures or inflatable figures, such as R2-D2 and the ever-loved Chewbacca.

The event closed by early evening but there were still several children in the library courtyard and surrounding area battling on with their lightsabers. Morenci fifth grader Levi Donaldson said, ” I really had a good time, It was even better than last year when they held it in the library. This time, there was a lot more room to move around.”

“Yeah, there was a lot more stuff and room to move around,” Young said. “It was all pretty cool. I think it was a lot of fun for everybody.”