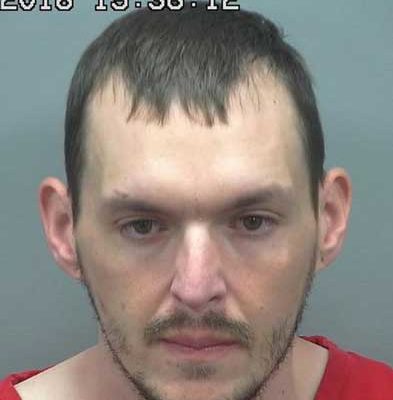 Contributed Photo/Courtesy GCSO: Jason Winter was booked into the jail on charges of robbery, burglary, and aggravated assault after allegedly robbing JoBi’s Market at knifepoint south of Safford on Saturday. Winter said he did the robbery to get caught so he would have a safe place from the Mexican Cartel, which he believes is after him.

GRAHAM COUNTY – A man who said he believed the Mexican Cartel was after him was arrested and booked into the Graham County Adult Detention Facility on Saturday after allegedly robbing JoBi’s market at knifepoint.

Jason Winter, 31, was booked on charges of armed robbery, burglary in the third degree, and aggravated assault. Winter apparently robbed the JoBi’s at knifepoint but did not inform his ride of his intentions. When the people who drove him there became aware of the robbery, they left and Winter was forced to leave the scene on foot. He was then quickly apprehended by Safford Police officers, who responded to a call of a burglary in progress. Winter was then remanded into the custody of the Graham County Sheriff’s Office, which investigated the incident.

According to employee statements to police, Winter was wandering around the store and then made small talk with an employee who was stocking worms. The employee then went back behind the cash register to ring up another customer and Winter soon followed with a knife in his hand.

The victim and multiple employees reported that Winter demanded the money from the cash register while pointing the knife at the victim. He said he had to get out of town because his life was in danger.

Video surveillance footage from the store corroborates the employees’ account and shows Winter holding up the employee at knifepoint. He can also be heard on the video footage saying, “This is a robbery” and “I need money. Someone is trying to kill me.” As he leaves the store Winter appeared to tell the clerk, “Thank you” and “Sorry . . . (I) just need money that’s all I needed.”

The surveillance footage also shows Winter as he left the store, first walking northeast toward U.S. Highway 191, then walking south for a bit before turning and walking northbound. Winter then threw his knife into a ditch and then stayed in an area northeast of the store until officers arrived and took him into custody. The knife was recovered along with the money he burglarized. According to the store owner, Winter took $595.01 from the register. When apprehended, officers confiscated $615.81 from the suspect.

Winter allegedly told officers that he had arrived in the area from Texas a couple of weeks ago but that a man who has connections with the Mexican Cartel was upset with him and he believed had ordered the cartel to kill him. He said he wanted to commit a crime and get caught so he would be safe incarcerated. The people who gave him a ride to Jobi’s said a third party asked them to give Winter a ride to an ATM and they had no idea he was going to rob the store. When they saw what was happening, they called 911 and left the area.