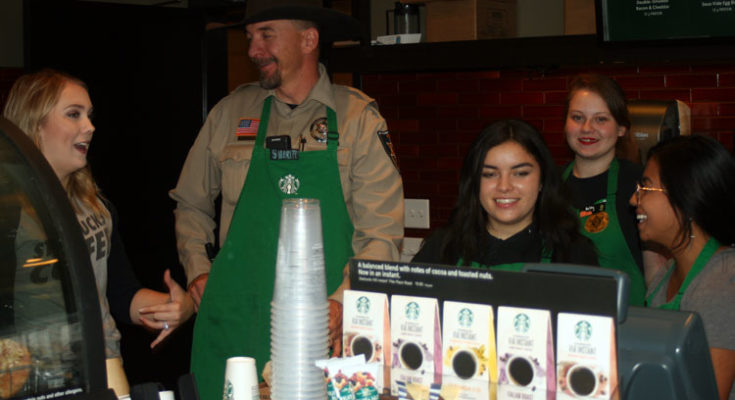 Walt Mares File Photo/Gila Herald: Greenlee County Sheriff Tim Sumner shown here assisting in passing out cookies at the “Coffee With Cops” on Oct. 3 at the Starbucks coffee shop in Morenci, acknowledged speeding intentionally on Oct. 15 to garner a reaction from one of his deputies.

GREENLEE COUNTY – On Friday, Greenlee County Sheriff Tim Sumner released a video on his personal Facebook page and admitted to intentionally speeding to goad a deputy into performing a traffic stop on him. He denied the allegations of harassment levied against him in a grievance sent to the Greenlee County Board of Supervisors.

“This was in no form harassment of this deputy or any other deputy,” Sumner said in his video. “There is no harassment going on in the Sheriff’s Office.”

“I have checked on numerous ones before as a sergeant, as a sheriff. I was checked on as a new officer myself and tested in these ways.”

The video was in response to the Gila Herald article Sheriff Sumner caught speeding 106 mph – Gila Herald: Dec. 12, 2019. In the article, the deputy advised Sumner was clocked on radar going 106 mph in an unmarked county vehicle while eastbound on U.S. Highway 70. Sumner attested that the deputy’s radar was not functioning and that is why he drove by at such a high rate of speed so that anyone could notice his vehicle was greatly exceeding the speed limit even without the aid of radar. In the grievance, however, the deputy listed that Sumner was indeed clocked on the patrol vehicle’s radar at 106 mph in the 65-mph zone.

If the deputy’s assessment is accurate, it is unlikely that the incident went as Sumner describes.

“At that point, I was following a vehicle at 65 when I saw that deputy,” Sumner said in the video. “I got out using my turn signal. I rapidly accelerated and then I just as quickly decelerated back down to the speed limit. I actually used my turn signal to get over. When I saw the deputy was pulling out with their lights coming on I was very relieved actually because I saw the deputy was actually going to do something.”

It appears unlikely that Sumner’s vehicle could accelerate from 65 mph to 106 mph in a mere few seconds as the vehicles passed by the deputy’s location as he advises.

He said he passed at such a high rate of speed, endangering the occupants of the van he went by, to test his deputy to see if the deputy would pull him over. However, according to Arizona Revised Statutes 28-624 regarding emergency vehicles, Sumner was not permitted to speed in that fashion for that reason.

“To me, that’s a great concern if a deputy would sit there and not stop me for doing that,” Sumner said in the video.

Sumner also advised that he was on duty as the sheriff because he had his badge and gun and computer with him, however, the deputy informed that Sumner was not checked on with Spillman, the law enforcement database that shows the on-duty officers.

In the video, Sumner says he routinely “checks” on his deputies but that this was the “the very first incident with this deputy.”

That statement is in contrast to the deputy’s statements to the Greenlee County Board of Supervisors in the grievance, which outlines several instances the deputy says Sumner was “constantly checking the GPS on my car, stalking, and harassing me.”

In the grievance, the deputy wrote that Sumner would instruct the deputy to meet him at random locations with no valid reason and no work matter to discuss as well as checking up on the deputy in the cover of darkness.

In the grievance, the deputy lists that the alleged harassment began in January when the deputy started a midnight to noon shift.

“I was on duty and drove north on Highway 78 approximately 15 miles from Three Way,” the deputy wrote. “At about 2 a.m., I observed a car approaching me. As it got closer, the driver turned off the headlights and slowed down to a crawl, approximately 5 mph. I recognized the car as Tim Sumner’s patrol vehicle.

I asked what he was doing and he said that he was driving up to check on a ranch that was further north.

After we spoke, I drove back toward Three Way and in my rearview mirror, I saw that Tim was following me in the same direction (south). He had just told me that he was driving up further north to go check on a ranch, however, he was following me southbound for approximately 15 miles. I believe he lied about the reason for being up there and had the GPS on my car tracked in order to come to my location without cause.”

At the end of the video, Sumner said it was a “lesson learned” for him and that he apologized to the deputy.

“I hope this deputy has a long, healthy, happy career,” Sumner said in the video. “Whether that be here or somewhere else.”

On Saturday morning, the deputy’s father called the Gila Herald and said Sumner had also apologized to him in October for “what he was doing to (the deputy).

The Gila Herald was informed that the Arizona Department of Public Safety has declined to investigate the speeding incident and harassment allegations, however, an official spokesperson for the DPS did not respond to a request to confirm or deny that information in a timely manner.