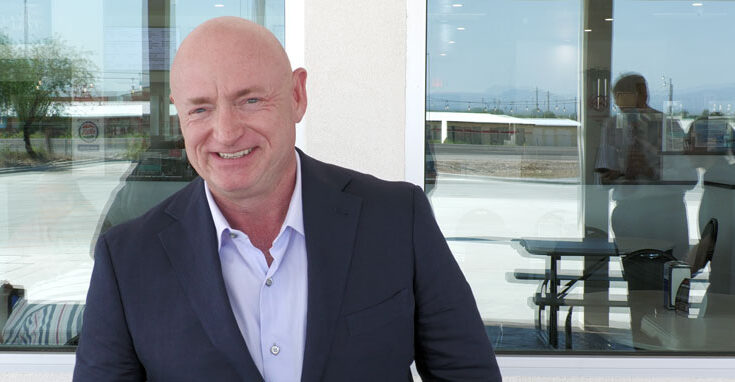 Jon Johnson Photo/Gila Herald: Senator Mark Kelly toured Graham and Greenlee counties on Tuesday and spoke with a variety of constituents and leaders in public and private sectors.

SAFFORD – Senator Mark Kelly (D-AZ) had a jam-packed Tuesday during his tour through Graham and Greenlee counties, but still found time to take in a bite at a Gila Valley institution and chat with reporters.

On his agenda was to inform about his support for a bipartisan infrastructure deal and how the bill will assist those in rural Arizona with a variety of issues, including water conservation, utilities, and high-speed internet.

The Gila Herald caught up with Sen. Kelly as he luncheoned at the Safford Taylor Freeze. During a brief moment with reporters, Sen. Kelly spoke about the climate crisis and the lack of water and how President Joe Biden’s bipartisan infrastructure bill will help.

“We’ve got to come up with a plan for the future,” Kelly said. “We’ve got to ensure our water future because it is the future of the state and our economy. So, my office, we’re looking at some solutions to this.”

Sen. Kelly spoke about water storage and water conservation and said he would do everything he could to make sure water remains available to those in the Gila Valley. While water cutbacks from the Colorado River that begin in January will affect Pinal County farmers more than those locally, Sen. Kelly advised that the Gila Valley’s water issues are also on his radar.

“We’ve got to be able to do more with the water we have and then we won’t get into situations where we worry about urban areas potentially taking water away from rural areas.”

“If you’re a rancher or farmer, I want to make sure that the water future for those rancher and farming families is secure.”

Kelly advised that the infrastructure bill will benefit Arizona by helping its economy grow.

Sen. Kelly also said that the bill will assist in getting high-speed internet into rural areas that are lacking the amenity.

“This is a lot like electricity in the 1930s. You can’t run a business. You can’t get a quality education. You can’t deliver the best healthcare unless you have high-speed internet. That’s what we’re trying to do.”

Taylor Freeze owner Sheryl Goodman hosted Sen. Kelly and his assistants during their time at her restaurant and said it was a pleasure to be able to connect with the senator.

“For him to learn the history and the struggles that our restaurant has gone through this past year through the COVID issues and regulations and everything, it was nice to have our voice heard a little bit,” Goodman said.

“He’s a nice man. Being a senator and being in the public eye is not an easy job. You get it from both sides. I admire anybody (who) would put their name and their face out there to do what they do. And we can’t gripe unless we get involved and voice our opinion.”

“It’s not often that I go inside a hair salon” Senator Kelly quipped, pointing to his bald head. “My wife, though, that’s a different story.” Sen. Kelly is married to former Congresswoman Gabrielle Giffords, who was gravely injured in a mass shooting ten years ago.

Sen. Kelly attended closed-door meetings with elected officials in both counties to hear about concerns and questions regarding needs in rural southeast Arizona. He then toured Taylor Freeze, a local fast-food restaurant in Safford as well as Con Carino Hair Salon in Clifton.

Shade and Arrow Hargis, film students in Safford High School, interviewed Sen. Kelly in Clifton. Asked about climate change impacts that are especially worrisome to their generation, Sen. Kelly related that he could see the effects of climate change from space. (Kelly is a former astronaut.)

“The first time I went up, we could see the canopy of green tops of trees of the rainforest in the Amazon in South America, with a copper-colored river running through it.  The fourth time I went up, the trees were all gone and the river was dry. We must do more to put our technology to work to combat the effects of carbon emissions on our planet.”

Sen. Kelly explained that there are provisions for more funding of climate change projects in President Biden’s Building Back Better infrastructure bill currently being debated in Congress.

“I have confidence that with the passage of this bill, our scientists can reverse some of these devastating effects that we’re feeling right now,” Sen. Kelly said. ” Americans are the most ingenious people on earth and they’ll be able to come up with environmental solutions if we make this a priority and provide the funding.” He added that we have resources for expanding solar energy in Arizona, but we need solutions as to how to store that energy.

Clifton and Safford both have a large population of veterans, and in light of this Sen. Kelly was asked about commitment for increased funding for mental health for this demographic. Sen. Kelly, a retired U.S. Navy Captain, sits on the Armed Services Committee in the Senate and is a sponsor of the Brandon Act, a bill that provides for improving the process by which a member of the Armed Forces can receive a mental health evaluation. Sen. Kelly said he is hopeful this bill will be passed this session because in part “the suicide rate among veterans is too high.”  He added that the Building Back Better infrastructure bill targets many aspects of rural healthcare, including lowering the cost of prescription drugs and providing funding for rural hospitals hit hard by the COVID epidemic.

Finally, the students related that many of their cohorts in high school remain unvaccinated, in some cases because their parents will not allow them to. Kelly stressed the need for all who are eligible to be vaccinated against COVID, adding that “it has been proven to work so much more effectively than any treatments available once a person has the virus.”

Those who are needing help navigating a federal agency such as the Veterans Administration, Social Security, Medicare, the Small Business Administration, the IRS, or obtaining passports can get help at kelly.senate.gov or through Kelly’s Phoenix office by calling 602-671-7901.