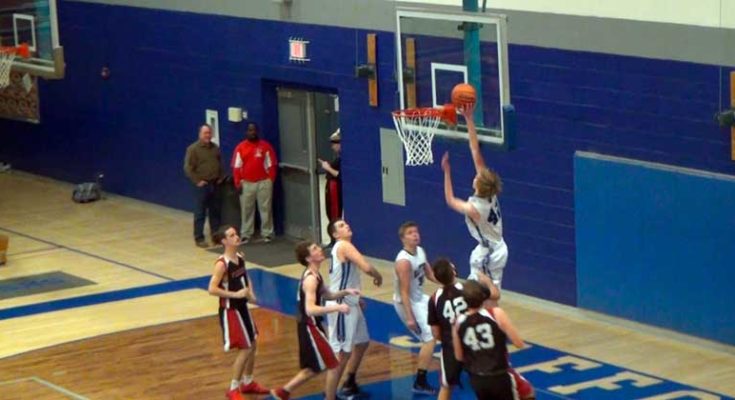 SAFFORD – The Safford Bulldogs (5-3 region, 16-10 overall) looked to avenge an earlier season loss to the Florence Gophers (4-4 region, 14-11 overall) on Thursday night. With perseverance and hard work, they withstood a late rally and held on for the win, 78-76.

The win moves the Bulldogs past Florence and into second place in the region behind Queen Creek American Leadership Academy. Florence slipped to fourth place behind Globe, which has the same region record as Safford. Safford owns the tiebreak, however, with two victories over Globe this season.

“We’re getting down to the end of the season where we need to win games,” Safford head coach Terry Williams said. “Florence is a real good team. We want to keep playing; we want to get into the postseason and they’re all tough games.”

Like two prize heavyweight fighters, the two teams slugged it out against each other all night with each answering the other’s scores time after time. Safford managed to pull away in the latter half of the fourth period and had a 7 point lead, 68-61, with just 3:00 left in the contest.

Globe would rally behind a couple of 3-pointers and a turnover that resulted in another 2 points. With only 4.8 seconds on the clock, Globe was down just 3 but Safford was inbounding.

The ball went to Dominic Gutierrez, who appeared to mishandle it for a carry, but the officials said the mishandling was the result of a foul and Gutierrez was sent to the line.

With ice in his veins, the junior guard calmly sunk both his free throws and a 3-pointer at the buzzer by Travis Armstrong only mattered to the academics and gamblers as Safford prevailed.

“They’re a tough team,” Collin Thompson said. “We’d seen them once earlier and they beat us and we wanted revenge, so we just came together and decided we’re taking it.”

Safford started out a little sloppy and seemed not ready to handle Florence’s full-court pressure, which resulted in a number of turnovers and, subsequently, points for the Gophers.

The Bulldogs also had trouble containing Florence’s 6’6” center, Rarey Sommer, who torched the Bulldogs inside for 16 points.

Sommer went scoreless in the defining fourth period, however, and fouled out with 3:17 to play while attempting to defend a putback by Stratton Baldwin, who scored the bucket and finished the 3-point play with a made free throw.

Instead, the Gophers relied on Nick Tucker and a gaggle of wing players to help carry them through the fourth period. Tucker ended up with a game-high 21 points.

“I think we played good at times,” Florence head coach David Silvas said. “I think we tried to do what we could do offensively and defensively, and I think Safford wanted it more.”

Safford had a balanced attack with five players scoring in double figures, led by forward Collin Thompson with 20, and guard Andrew Smith with 19. Smith was money from deep in the first and third periods and finished with five made 3-pointers.

“We really wanted to play our heart out and just go for it,” Thompson said. “We focused (on) defense and free throws all week. We got a lot of key steals from them and we made a lot of key free throws as a team . . . This gives us a big momentum push, and I think we can make a big run come state.”

Thompson made his presence felt all over the court, on defense and offense as he made play after play. Thompson helped bring the ball up at times, set up his teammates with assists and scored when he needed to. And he wasn’t the only one. Safford’s other big men, Stratton Baldwin and Drew Cochran, also had good nights and shared the ball well, finding the open teammate for the easier bucket. Baldwin finished with 13 points while Cochran added 10.

“We still have things to work on, (but) I’m glad for the boys,” Williams said. “They worked hard, real hard. They deserve it.”

Down 61-60 with 4:14 left in the game, Cochran had a stretch where he hit a 3-pointer, stole one pass and broke up another out of bounds. His shot started an 8-0 run for Safford that ended up being the key run of the night that put the game just out of reach.

Down the stretch, Florence did what it could to close the gap, fouling Safford and sending them to the line and hitting 3’s of their own. But the Gophers came up just short and Safford left Norma Bellamy Gymnasium victorious with their heads held high.

“Safford did everything right tonight,” Silvas said. “They wanted it more and they executed their game plan and we didn’t. You know, hats off to them.”

Safford will host the Queen Creek Benjamin Franklin Chargers (2-6 region, 9-14 overall) on Tuesday, Feb. 6 and then finish up the regular season on the road at Coolidge on Thursday, Feb. 8.

The Pima Roughriders (12-0 region, 23-2 overall) destroyed the Benson Bobcats, 73-36, for their second blowout victory in a row and 11th consecutive victory.

Pima will have a bye in the opening round of the 2A East Regional Tournament, which starts Tuesday, Feb. 6 in Thatcher. Pima with then host the second round Thursday, Feb. 8.