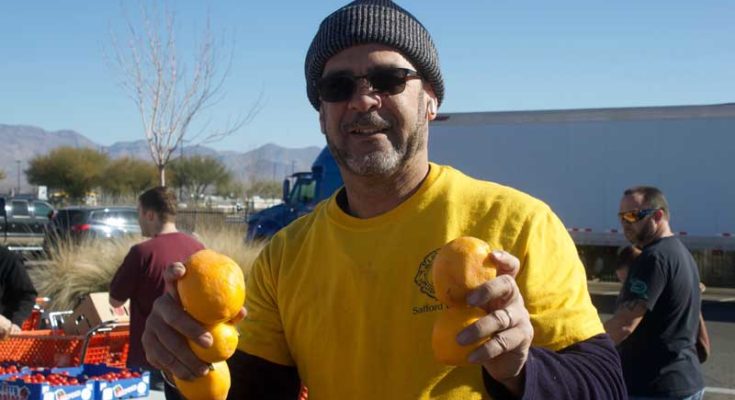 SAFFORD – If you bring it they will come. Well, certainly if the weather is as nice as it was Saturday morning.

A crowd eager to receive farm-fresh produce and vegetables at a discount bargain price packed the Home Depot parking lot Saturday morning for Borderlands’ monthly Produce on Wheels With-Out Waste (POWWOW) program. Locally, the Safford Lions Club has stepped up to help organize the program, which brings produce and vegetable that would have gone to waste to people who can use them.

Safford City Manager and Lions Club member Horatio Skeete was working the site and making sure the produce was flowing.

“This is probably one of the better turnouts we have had,” Skeete said. “But it’s not uncommon that we between 300 and 400 people.”

At the Home Depot site, customers form two rows and gather the various produce as they go down a line of tables as volunteers hurriedly look to replenish the stock from boxes that arrive on pallets. Customers are allowed to gather up to 60 pounds of produce for a $10 contribution, which basically just covers the costs to bring the food to the site. The Lions Club members began arriving at 6 a.m. to set up the tables and by 8 a.m. the market was ready for customers. The program runs on the first Saturday of the month during the produce season. The next event is scheduled for Saturday, April 7, from 7 – 10 a.m.

Oregon transplants Christina and Mark Renfro said they enjoyed the program and that there wasn’t anything like if at their previous home.

“This is really cool, Christina Renfro said. “I really like this. It’s good for the community. It’s a great program . . . Sometimes I think the produce is better quality than what you get at the store.”

Those who would like to volunteer can simply show up at the site and get to work. Kathy Loehr was in line to get some produce and noticed a large crowd swelling while the Lions Club and the numerous volunteers raced to try to keep the line moving swiftly. While the line was long, it moved quickly and the wait time at the peak of people was only roughly 15 to 20 minutes for the entire process.

“Just show up and they’ll call you to get in line behind the counter,” Loehr said. “It’s the best deal in town.”

For more information on the program or to sign up for its newsletter to see what produce could be available click here. 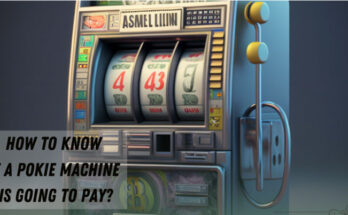 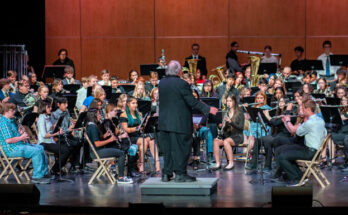 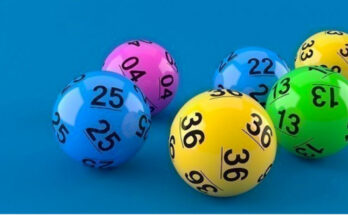