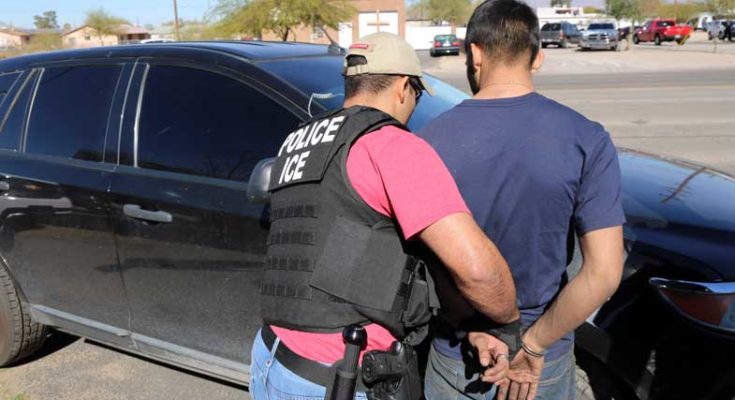 Contributed Photo/Courtesy ICE: An 18-year-old suspect is taken into custody five days after crashing a vehicle with two illegal immigrants in the trunk.

The incident occurred over the weekend when Nogales Station Border Patrol agents assigned to the immigration checkpoint near Amado referred the driver of a sedan for secondary inspection. As the vehicle moved past the primary inspection, the driver accelerated, fleeing northbound.

Federal agents pursued the vehicle for several miles before the driver lost control and crashed into a ditch off the roadway. The driver exited the vehicle and fled on foot. After agents secured the vehicle, they discovered two male Mexican nationals – illegally present in the country – in the trunk. Both men, ages 32 and 36, were not injured during the incident and are being processed for immigration violations.

After thoroughly searching the area, the driver could not be located. Less than four days later, agents were able to procure a federal arrest warrant for the suspect after reviewing evidence left behind in the vehicle and at the immigration checkpoint. Through investigative techniques, HSI agents located and arrested the suspect without incident, ending the five-day search.

The defendant made his initial appearance in federal court Friday and has been charged with human smuggling.

The arrest of the suspected smuggler exemplifies the coordination and collaboration within local, state, and federal agencies to bring dangerous criminals involved in illicit human smuggling to justice.

The primary mission of HSI’s Border Enforcement Security Task Force (BEST) is to combat emerging and existing Transnational Criminal Organizations (TCO) by employing the full range of federal, state, local, tribal and international law enforcement authorities and resources in the fight to identify, investigate, disrupt and dismantle these organizations at every level of operation.

Federal and state law allows agents to charge individuals with a complaint, a method that allows the filing of charges for criminal activity without inferring guilt. An individual is presumed innocent unless and until competent evidence is presented to a jury that establishes guilt beyond a reasonable doubt.