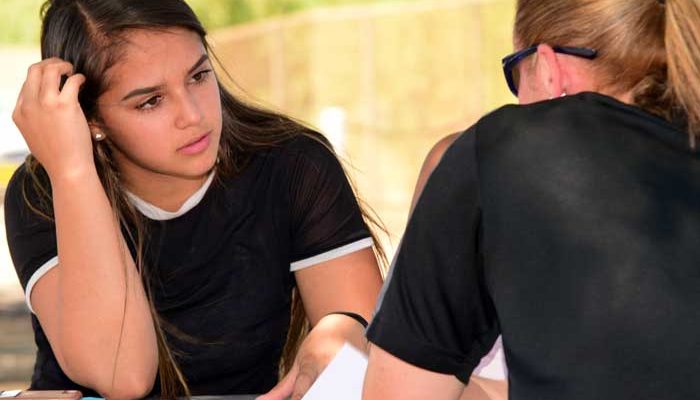 Photo By Raymundo Frasquillo: Morenci Class of 2018 grad Destiny Apodaca listens to South Mountain head coach Christa Pjeninger before signing a letter of intent to accept a scholarship offer. She is the fourth class member to have an education paid for because of athletic prowess.

MORENCI – Following a stellar individual post-season, Destiny Apodaca capped her softball prep career as a member of the 1A-3A South All-Stars on June 2. The Show Low-held double-header ended with a split.

Three weeks later, the Morenci Class of 2018 grad was offered and accepted a full-tuition scholarship to attend Phoenix South Mountain Community College. The scholarship is worth $1,003 per semester or $4,012 for a two-year period.

On Saturday, Apodaca signed the letter of intent amidst immediate and extended family members plus MHS coaches at Sumitomo Park, in the shadow of her field of dreams. Afterward, she brandished an ear-to-ear smile alongside grandparents Eva Llamas and Fortune Torres, parents Tanya and Isaac Apodaca plus sisters Asiah and Caasi.

“I saw her once during this year’s high school playoffs,” six-year SMCC head coach Christa Pfeninger said. “I went there and decided to go watch Morenci to see what they had. I saw her dive for a ball and I couldn’t tell if she got it. She missed it, but I was impressed by her effort, drive, and commitment.”

“I usually watch players several times, mostly in club tournaments, before I decide I can use them,” she said.

Apodaca twice earned 2A East Region 1st team honors, plus was selected All-Conference 2nd team as a senior and honorable mention as a junior by a vote of state-wide head coaches.

Apodaca excelled at the middle school and high school level and now is poised to take on the challenge at the next level. The diminutive junior college signee will use her talent and skills for the SMCC Cougars beginning in August.