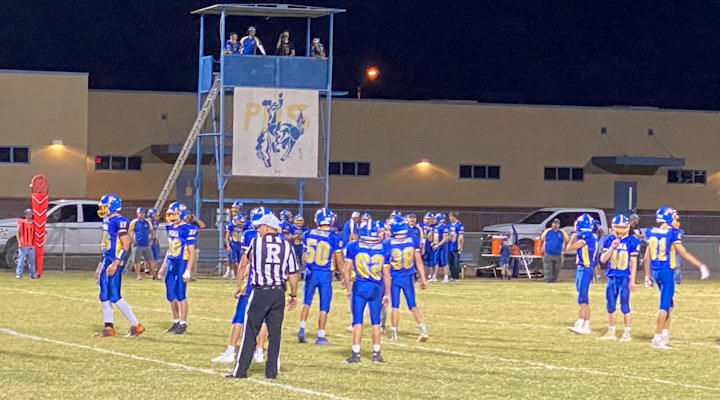 Gila Herald Photo: The Pima Roughriders made quick work of the visiting Scottsdale Christian Academy Eagles for their homecoming on Friday with a 53-0 blowout.

PIMA – It was homecoming in Pima on Friday night as Roughriders from all generations converged on Edd Hubbard Field to watch the hometown team take on the visiting Scottsdale Christian Academy Eagles.  To the delight of the home crowd, it was all Pima all night long as the Roughriders defeated the Eagles 53-0 to improve to 3 – 2 on the season.

The Roughriders scored early and often throughout the night.  After giving the Eagles the ball to start the game, the stout Pima defense forced a Scottsdale Christian punt.  In what would be consistent throughout the night, the Pima offense established its running game and quickly moved the ball down the field.  The Roughriders took the lead when less than five minutes into the game junior Wyatt Wiltbank took it in from the seven.  After a successful PAT by sophomore place kicker Jaxon John, Pima was up 7 – 0.

After the Roughriders’ defense forced Scottsdale’s second punt of the night, the Pima offense was back in business later in the first quarter.  Starting their possession on their own 36, Wiltbank ripped off a 50-yard run from scrimmage, which moved the ball to the Eagles’ 18.  A few plays later, senior running back Brody Brown got in on the scoring action when he took it in from the five.  After the kick, it was Pima 14, Scottsdale Christian 0 with 2:40 left in the opening quarter.

While Pima played inspired ball all night, there were a few miscues.  Early in the second quarter, Scottsdale Christian retained possession when the Pima return man let an Eagles’ punt slip though his fingers.  The Roughriders’ defense answered the call and forced and recovered a fumble two plays later.  The Roughriders took advantage when a beautifully designed QB run/pass option worked to perfection.  Junior signal caller Seth Russell flipped the ball to Brown, who hit pay dirt for his second score of the night.  After a successful PAT, the Roughriders were up 21 – 0 with 8:13 remaining in the first half.

The Eagles fought diligently and would come as close as they would to scoring all night when they had they worked the ball down to the Roughriders’ 9-yard-line.  After a Pima offsides penalty, the Eagles were looking at first and goal form the Pima 4-yard line.  It was here that the Roughriders’ defense showed its true grit.  After multiple plays which resulted in Scottsdale Christian losing yards, and aided by an Eagles offsides penalty, the Roughrider defense kept the Eagles scoreless when Scottsdale Christian’s fourth and goal pass attempt from the Pima 18 fell incomplete.

Taking over on downs at their own 18, Pima needed only one play to find the end zone again. Wiltbank scored his second touchdown of the night on an 82-yard run.  While the point after attempt failed, the Roughriders had a commanding 27 – 0 lead with just more than two minutes in the half.

Scottsdale Christian tried to get something going again as the half was drawing to a close, but freshman Clark Ashby and senior Xavior Gracia both had consecutive sacks of the Eagles’ quarterback.  A bad snap led to Pima blocking Scottsdale Christian’s punt and the Roughriders found themselves in business again.

With 31.5 second left in the first half, Pima had the ball on the Eagles’ 20.  On first down, Russell found junior Grant Ashby in the corner of the end zone.  The 20-yard pass fell perfectly in the corner, and Ashby dragged his feet inbounds for the fifth Pima TD of the night.  After a successful PAT, the Roughriders took a 34 – 0 lead into the half.

The second half went much like the first for the Roughriders.  Whitbank had another long TD run, taking it in from the 50 early in the third.  Russell would also get in on the scoring action, calling his own number and sneaking one in from the 1-yard line with 1:38 left in the third quarter.

The Roughriders would score one more time.  With the Eagles desperate and deep in their own territory, they turned to a passing game to try to at least get some points on the board.  Grant Ashby, this time playing defense, stepped in front of an Eagles pass and took it to the house.  Ashby’s pick 6 gave Pima a 53 – 0 lead and closed out scoring for the night.

In other prep football action:

The Safford Bulldogs (1-0 region, 5-0 overall) kept their perfect season in tact with a 34-10 victory over the Sahuarita Mustangs. Safford will next host the Valley Christian Trojans (3-0 conference, 5-0 overall) on Friday, Oct. 1, starting at 7 p.m. in a battle between unbeaten teams.

The Thatcher Eagles (2-0 region, 4-1 overall) suffered their first loss of the season at the hands of the visiting 5A (Tucson) Desert View Jaguars 6-28. The Eagles picked up the game against the Jaguars after their original game against Douglas was canceled.

Thatcher looks to get back into the win column next week as they travel to (Tucson) Empire to battle the Ravens on Friday, Oct. 1, starting at 7 p.m.

The Morenci Wildcats (4-0 conference, 4-1 overall) dispatched the visiting St. Johns Redskins 27-7. The Wildcats will next travel to Bisbee to take on the Pumas on Friday, Oct. 1, starting at 7 p.m.

The Duncan Wildkats (1-3 region, 2-3 overall) came back from being down against the Baboquivari Warriors to win 32-28 in a home game thriller. Duncan will next travel to face the Cibecue Wildcats on Friday, Oct. 1, starting at 7 p.m.

The Fort Thomas Apaches (1-2 region, 1-3 overall) lost their third game in a row, falling 12-56 to the San Manuel Miners. The Apaches look to bounce back next week on the road as they travel to face the Valley Union Blue Devils on Friday, Oct. 1, starting at 7 p.m.